It was a homecoming for Austra on Thursday night as the band — led by Katie Stelmanis — kicked off the North American leg of their tour with a sold-out show at Lee's Palace just a couple of days after the release of their debut LP Feel It Break. 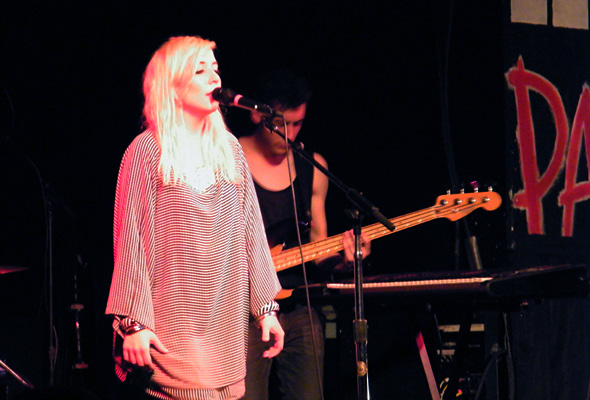 Two girl-guy duos opened for the Austra. Army Girls — consisting of the fiery Carmen Elle on guitar and vocals and Andy Smith (also of Heartbeat Hotel) on drums — launched their assault on the early crowd. And, as the crowd grew larger, Trust, another rising local electronic duo, took the amps to their threshold, and energized the crowd with their thundering beats.

The members of the band seemed laid back and casual, popping in and out from behind the curtain, talking amongst friends in the crowd, and interacting with fans. Postepski and Stelmanis looked happy and at ease as they laughed and danced amidst a sea of topknots.

The members of Austra were welcomed on stage with warmth and excitement just hours after the team who handle Jay-Z's Life + Times website posted the band's single "Lose It," along with four very important words of Twitter promotion: "Get to know AUSTRA." Postepski and bassist Dorian Wolf stepped onto the stage first, then Ryan Wonsiak on keys followed by the twins Sari and Romy Lightman (Tasseomancy). Finally Stelmanis, the group's operatic monarch, emerged adorned in stripes and glowing in gold. 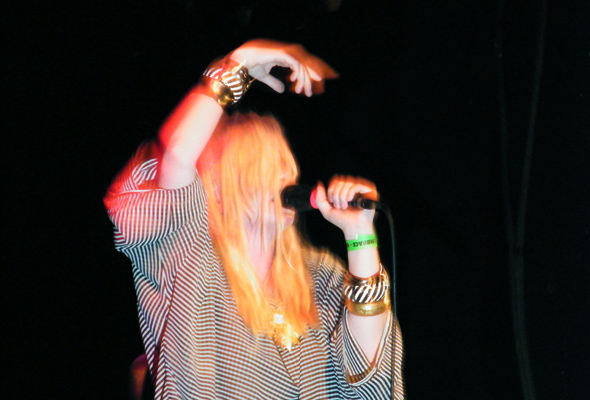 Austra commenced with Feel It Break's lead track "Darken Her Horse." Stelmanis' vibrato echoed through the room, and the song's galloping bass and pulsing rhythm swayed bodies in the crowd. "Lose It" followed, its spellbinding polyphonic spree sounding as good live as on the album version. Stelmanis raised her hands toward the audience as if orchestrating them, her fingers whirling shapes in the air like she was casting them all under her spell. 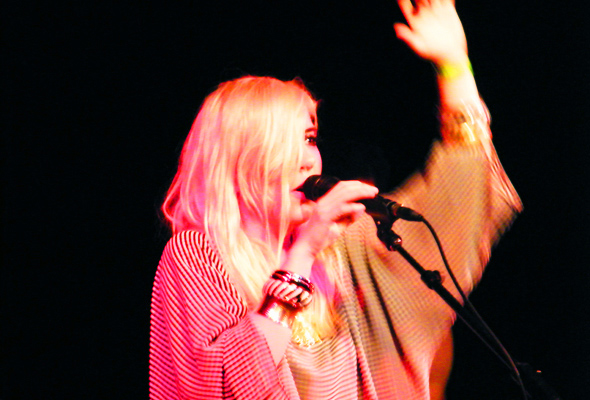 As Stelmanis explained in a recent interview, she wants people to enjoy her music "in a very cerebral way, and also on the dance floor in a very physical way." And the band achieved that cerebral-physical effect, as hands immediately raised in the air and bodies let loose in recognition of the looping stabs of drums and bass of the stand-out track "Beat and the Pulse." It was an emotionally charged anthem and the response was instinctive, untamed, and sensual.

Keeping the crowd entranced, Austra ended their set with the ferocious "Spellwork." The homecoming wrapped with an encore that included — to the delight of the audience — a cover of Joni Mitchell's "Woodstock" and their own track, "The Noise".