In The Window: Sonic Boom pimps The Dears and Record Store Day

For this week's In The Window, I sauntered over to Bloor and Bathurst to visit Sonic Boom, a store with one of the city's best window displays.

Although you won't normally find a ton of different albums in each of Sonic Boom's two windows — they prefer instead to do elaborate displays for a limited number of bands — it's always cool to see what creator Tim Oakley has put together for those passing by on Bloor. Featured right now in the left window is Montreal-based band The Dears' fifth album Degeneration Street, which looks a lot like a messy bedroom, and on the right is a appropriately vinyl-heavy display related to Record Store Day. 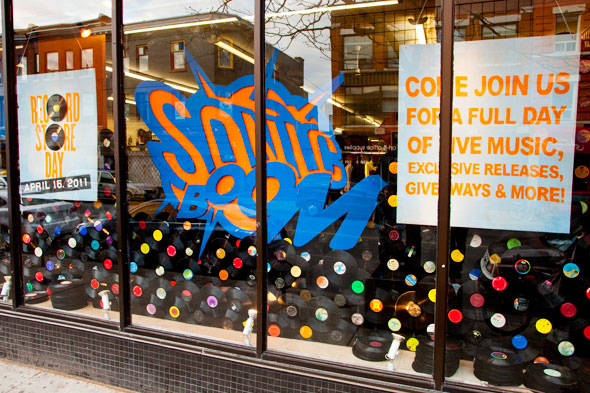 Here's what Oakley had to say about his recent work.

Window 1: The Dears - Degeneration Street
"We were approached by the band to do this one and since there are several devout fans working at the store, I was only too happy to comply. I viewed the minimalist album art as a challenge and tried my best to emulate the incredible concrete sculpture that on the cover.The messy clutter that litters the rest of the window is inspired by photos in the liner notes. Worked out pretty great, although I did use parts of my drum kit to flesh it out and I recently noticed the sun has warped my floor tom. Looks like Sonic Boom is coughing up a new set of cans!"

Window 2: Record Store Day
"A bunch of rare and crazy exclusive releases,a full day of live music, two stages, prizes, free pizza, what's not to get excited for!? It's our biggest day of the year, so we figured we'd change our routine and actually promote the store for once. Fortunately, we had a surplus of expendable vinyl I could employ. Unfortunately, with the nice weather coming, I give the window about 48 hours before all those records end up like my drums — melted! Hey, I can just tell people I'm a fan of Dali."

Sonic Boom will celebrate Record Store Day on April 16th with live music from 1pm to 9pm. For information of the bands participating head on over to their website.