Frank Turner gets the El Mocambo singing along

Frank Turner recently performed at the El Mocambo and, although he was armed with only an acoustic guitar, he was not alone in his performance. With every fan in the crowd playing the role of backup singer, the show was a classic example of why live music often trumps studio recordings. If you like singalongs, heartfelt ballads, and genuine good times, Frank Turner is not a musician to miss.

Opening his set with I Knew Prufrock Before He Was Famous, the first track off what I think is his best album, I knew the vibe was set with the crowd already screaming along singing "Yeah, well life is about love, lost minutes and lost evenings — this is what Frank Turner is all about. 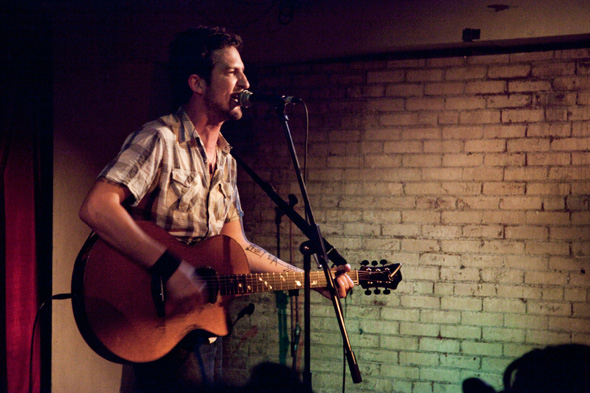 The first time I saw Turner was at The Horseshoe back in October, and the atmosphere was considerably different for two reasons; this time he didn't have a backing band and, more significantly, this week's show was on a Tuesday. Turner is a fan of drinking, and alcohol accents his music perfectly. Although Turner had the same energy in both performances, this time around the crowd seemed to be a little more tame without the Friday night "party vibes."

One moment I found particularly interesting (and personally relevant) was a story he told about how police back in the UK used a tactic during protests called "kenneling" — no doubt a sensitive topic in Toronto. He continued by telling us how he was able to get out of a kennel by pleading that his most annoying ex in the world was in the same kennel and he could not stand to be with her for eight hours. The story finished with the police officer letting him go and he then proceeded into his song Love Ire & Song singing "Oh but surely just for one day, we could fight and we could win. And if only for a little while, we could insist on the impossible." 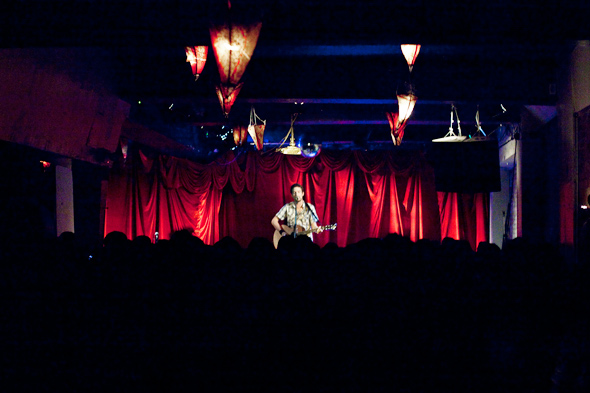 Turner's been prolific over his career, having released four full lengths, three EP's, and a ton of compilations and splits, all over a short four year period. During his set he even explained that one of his EP's was written with a friend over "a bottle of whisky, two guitars, and four hours." Throughout the set he played all the favourites off what appears to be the fan's best-loved album Love Ire & Song, including Substitute, Long Live The Queen, and Photosynthesis. He also played a range of older songs including Worse Things Happen At Sea and songs off his new albums such as Glory Hallelujah - an honest song about there being no god.

In many cases the crowd was yelling requests at Turner and he was happy to oblige saying, "I had a setlist... but fuck it!" — which is a pretty good example of his credo/observation that "music brings people together and it's fucking awesome." He even had the whole crowd playing "imaginary harmonica" saying that anyone not playing was "too cool and a fucking hipster". As Turner puts it "if music was the food of love then he'd be a fat romantic slob. Well music, it's his substitute for love" 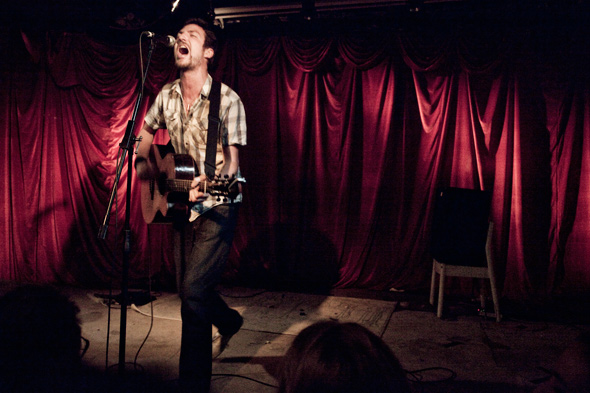 Turner ended the set the same as he did at The Horseshoe with a classic of his, The Ballad Of Me And My Friends, with what I think is his signature exit he left the crowd screaming "we're definitely going to hell, but we'll have all the best stories to tell." - one of those lines you keep repeating in your head until you fall asleep.

By the end of his set I had promised myself one thing; that I will never photograph a Frank Turner show again. Why? Because I want to substitute my camera with a buzz and want to be in the heart of the crowd screaming along with every other passionate fan.