At this time last year, Warren Hildebrand was putting the finishing touches on his album Swung from the Branches. Hildebrand, who performs under the musical persona Foxes in Fiction, originally released the album on cassette through his own online tape-based record label Orchid Tapes.

By springtime, music blogs - including Pitchfork - were noticing Hildebrand's album and spreading his songs like helicopter seeds. This week, I had a chance to talk with the artist. Here's what we chatted about.

Your music has been described as "bedroom pop." What does "bedroom music" mean to you? How would your music change if you recorded in a bigger studio?

To me, bedroom pop doesn't really constitute a certain genre or style of music, but instead more of an aesthetic or feeling that comes across in music that someone (usually just one person) has recorded in their (usually minimal) home or bedroom studios.

To be associated with that style of home-brewed musicians is really exciting for me. I've always been really interested in home recording and the idea that someone can make something really beautiful and honest on a small budget with a few microphones, a computer and desire to make music. In the past few years it's kind of begun to feel more like a movement, of sorts. With the internet and music blogs, it's obviously a lot easier for young musicians to find recognition and listenership online, and I think for the first time people are really beginning to recognize and explore all this fantastic stuff that is happening in people's bedrooms.

As it stands right now, I don't know how comfortable I would feel recording in a legitimate studio. A lot of my writing and recording process and even my 'sound' is really improvisational and depends on my own little studio set-up at home. And since I'm the only member of Foxes in Fiction it would probably be a very awkward and expensive time. I have plans for starting an actual 'band' apart from Foxes in Fiction sometime in the future, I think that will end up being better suited for something like that. 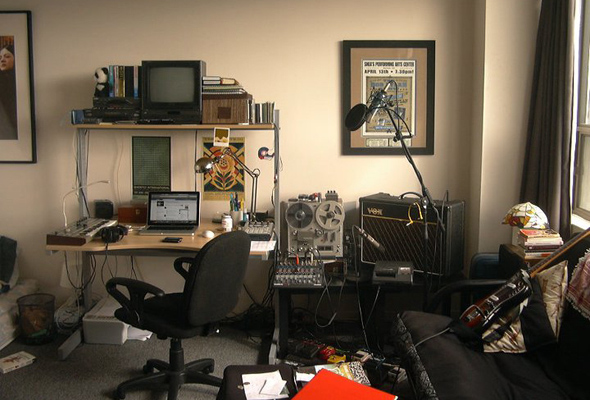 I turn to photos and music for inspiration whenever I have writer's block. Do you have images, books or songs you turn to in order to get ideas?

Depending on what I'm working on with music stuff, it can be really easy for me to burn myself out on something if I'm getting really frustrated, so I try to have a bunch of other interests I can turn to whenever that happens. I've always been really interested in visual art. I was doing a lot of stuff with painting, film photography and graphic design long before I ever became seriously interested in music. When I was about 11 or 12 I made a lot of Flash animations and hosted them on Newgrounds and the websites that I was making at the time, so that sense of the computer being my canvas has always been there, and I think for anyone who works on visual art and music, they start to notice that they begin to inform each other in subtle ways. More recently I've been lending some of my photography and graphic work to friends that I have also making music, which is really gratifying to me.

There are songs in your album that contain salvaged sound clips from the past. What's your intention with these clips? Is it to be nostalgic or do you have another reason for including them?

I've always really liked the idea of integrating the seeming unmusical into more traditional compositions. As I was growing up listening to bands like Boards of Canada, The Books or reading about people who experimented with musique concrete. I always really admired the placement of vocal samples in their recordings to achieve a certain effect or how it can act as a substitute for vocals. Over the years I've amassed a pretty large collection of cassette tapes with my own and found recordings, so I sometimes like to (poorly) experiment with cutting them up and putting them in my own recordings for nostalgic or sentimental reasons. It's also a good way to trick my friends into listening to my music, ha.

Are there other things you collect that inspire you?

I have a growing collection of cassette tapes that I'm kind of proud of. There's a Thrift Store in Oakville that I usually go to when I'm in town that always seems to have some great old stuff. I also have a fair share of film cameras from the 70s and 80s that I try to make good use of. I used to have a full collection of all The White Stripes super early vinyl singles, but in an instance of teenage fiscal desperation I sold them on eBay for whatever reason. This hurts extra bad today having read the news that they just broke up.

There's a song you have that's not in the album called "Bathurst," a song you tie to one of the happiest periods of your life. Then there's "Mialectric" that draws samples from Yonge St. Have you always lived in Toronto? How does the city inspire you?

Toronto has always been a place that I've been strongly drawn to, no matter where I've lived, but I've only lived here for about a year and a half, maybe a bit less. I first moved here from Oakville to attend OCAD University, but after dropping out at the beginning of this year, I've just been hanging out doing my own thing and focusing on other pursuits.

I think that growing up in a lot of smaller towns and suburbs throughout my life made me idealize the culture and excitement of the city, which always seemed to foster creativity and arts infinitely more than any of the places I lived growing up. After moving here I've thankfully discovered that that's true for the most part. I feel as though a lot of the luck, opportunity and overwhelmingly positive reception that has befallen me in the past year can certainly be attributed to my moving to Toronto.

You provide commentary for each song in the album, while many musicians you don't really know what they're singing about. What role does storytelling play in your song-writing?

I don't really consider myself a classically talented songwriter or lyricist, so a lot of the time writing commentary or explanations about certain songs is my way of fully translating what ideas I was trying to get across or what images or memories I had in mind when composing a certain song. I've always been a big fan of discovering the meanings or intentions behind songs or albums that I listen to, so I kind of try and do that myself by bringing everything around full circle and adding that element of transparency that makes me feel like my songs may end up being easier to connect or relate to. I like being an open person.

The last album you put out was the Alberto EP, which has "Bathurst" on it. Do you have new music you're working on?

I'm always working on something new, but right now I'm working on a few different EPs, which I'm not sure how I'm going to release, as well as an LP, which is going to be released on Ghostly International sometime in the fall of this year. I just spent the last three weeks resting at my mom's house in Oakville with a pretty bad respiratory illness and, during the higher points of that whole period of misery, I was able to work on a few new demos and sketch out some ideas that will eventually find their way on that record. It should be good. I'm really excited to get to work on it.

Two of my favourite songs in the album - "Jimi Bleachball" and "Memory Pools" are based on the times you spent with your closest friends. Is the greatest reward of making these songs about being able to relive those moments?

To me, the greatest reward of making music and the main reason why I continue to do this is being able to see and hear about the bond that people have come to have with the work that I've put out. Seeing real life emotional connections and hearing stories about how my music has figured into people's daily lives is one of the most incredible things to have ever happened to me, and I feel extremely blessed to know that whatever it is I'm doing resonates with people in some way.

Catch Foxes in Fiction along with Spirit Oak and DJ Daniel Brooks of Medallions at Tabula Rasa's book launch for Justin Lee's new work Our Liner Notes on February 11th.

Swung from the Branches remains free for download on the Foxes in Fiction website or purchase his other EPs on Orchid Tapes.

Also, check out The Neighbourhood Mixtape: Shadow Season to listen to his single "Bathurst" and download one of his instrumentals for free below, courtesy of I Guess I'm Floating.

Photos of Foxes in Fiction by Rachel Gordon.