Lessons in heartbreak from Florence and the Machine

I'm just going to come right out and say it: Florence Welch has pipes, and she can damn well use them. Also, I was definitely in the minority as a male at the Sound Academy on Wednesday. This was girls' night, and it felt like I was back in university, only the prof was a six-foot, fire truck redhead with soaring vocals and the class was Tales of Heartbreak 101. And everyone showed up for the third class.

The Sound Academy was clearly sold-out. If you were on the main floor, you weren't moving around easily. Florence and co. (aka. the Machine) have been riding a steady climb since their first time in Toronto last fall when they played Mod Club. Next was the roomier Kool Haus back in April, and according to the girl beside me last night, the full band then hit up Ronnie's after that show. Now back for their third time, they're still riding the steam off their debut album, Lungs. (Like I said, Florence has pipes.) But there was a Twilight song, crap load of awards and an MTV Video Awards performance to keep the steam, er, steamy. 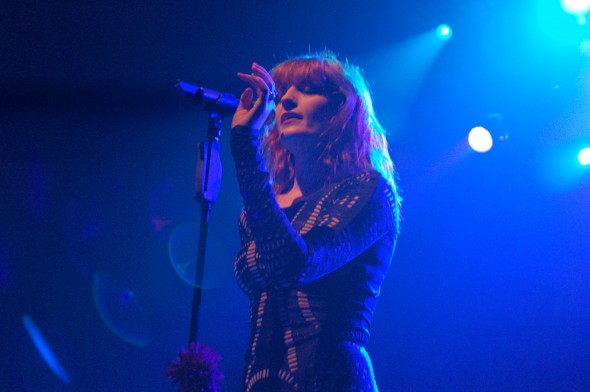 Striding onto the stage, which was equipped with the band's notable harp, Florence was decked out in a black floor-length dress, and notably barefoot. Leading with "Howl," she stabbed a drum at her side with a drumstick like she was chopping onions viciously. When not doing this, she danced in a somewhat hippy-I'm-one-with-the-earth dance around the stage. It was all good and organic as Florence seems to know she's a natural performer; she commands the stage well.

The stage, it is of note, was essentially a large half-moon donated to Florence, while the band stood off, somewhat in the shadows. The Machine's sound was sharp, especially from the drummer, who was able to deliver galloping rhythms to Florence's penchant for high chorus. With the drum still at her side, Florence aptly segued into the "Drumming Song," a suitable piece of foreshadowing to a night filled with building, soulful crescendos. 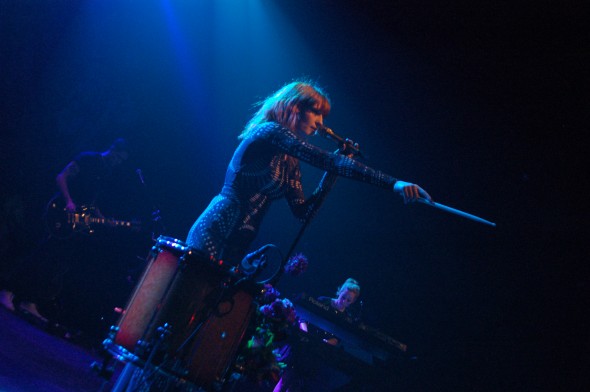 Basically pulling all material from Lungs, the somewhat new "Strangeness and Charm" made its live-in-Canada debut to an atypically apathetic crowd. The songs they didn't know word-for-word were enjoyed, but they were there for the material they've been singing for months, stampeding around bedrooms. It seemed that the audience was there to escape writing essays and sing along to Florence's standout emotive hits like "Cosmic Love," "You've Got the Love" and the impressive finale-before-the-encore "Rabbit Heart (Raise it Up)." And they seemed to know every word - then again, Florence has been to the city three times touring on the same, sole album.

The three-song encore that followed the 90-minute set included "Heavy in Your Arms," which is the Twilight ditty, the slightly rockier, get-out-of-my-face "Kiss with a Fist" and closed with the predictable hand-clapper, "Dog Days are Over." It seemed at this point that all the work was done for Florence - the crowd was happily self-involved, singing along, the band was on point, and she was hitting every note with ease. To such a point that it didn't really matter that we were at the Sound Academy in the first place.