Upon meeting TTC buskers Sue and Dwight Peters on the northbound Bloor-Yonge platform, I was quite surprised and flattered to find that I didn't have to spend much time introducing myself.

"I've been reading your busker profiles on blogTO," said Sue. "I actually have them bookmarked. I knew about some of these fellow buskers before, but it's interesting to know more about them, and I'm always meeting someone new."

The couple have taken their interest in other people as far as East Africa in their humanitarian efforts, and as buskers, they have brought a few of their stories back to the tunnels of Toronto's transit system.

I decided to spend a bit of time getting to know Sue and Dwight. After all, I figured it was about time that they themselves were in the spotlight.

First of all, tell me a bit about yourselves. Who are Sue and Dwight?

Sue and Dwight are a folk group duo. We also happen to be a couple, which is kind of nice, because we're doing something together that we both enjoy. We're both singer-songwriters and we have a regular show every Saturday afternoon at the Cameron House. We've been playing the Saturday matinee there for three years, every week from 3:30 to 5:30 p.m. We also perform in clubs, festivals, and stuff like that.

What's it like performing as a pair in the TTC busking program?

We auditioned for the TTC busking program as a pair and we've always performed as a duo. However, Sue tends to go out on her own fairly often to perform because Dwight also has a day job. It leaves him with a little less time to busk.

It's nice busking as a pair. With the two instruments, there's a little more volume. Also, we harmonize together, and it adds an extra boost to the sound.

What instruments do you play?

Sue just plays guitar. Dwight plays accordion, guitar, and piano. Dwight's been playing for years. He started when he was a kid, and picked up the guitar when he was a teenager. The accordion is a more recent addition. Sue didn't start the guitar until about five years ago. She actually took it up because at that time we were thinking of auditioning for the TTC busking program, and we thought having a second instrument would be beneficial, and give us more volume.

Can you tell me a bit about the song you performed for me, Marching?

Sue started writing it after spending a bit of time with some women who had been through some rough times, but still kept a positive outlook on life. Many women that we met in Africa faced the same situation. They just kept marching on ahead. It's a real tribute to women.

Are all the songs you perform original works?

Not all of them. We do some covers. We probably do more covers while TTC busking than we do in our other shows, because we'll be out there for a few hours, and it's fun to play different music. At our club shows and festivals, we do mostly original music.

What are your most popular covers?

One that we've had people stopping and singing along to is I Shall Be Released by Bob Dylan. We also do Leaving on a Jet Plane by John Denver, and Angel of the Morning by Chip Taylor.

Where does the inspiration for your original works come from?

We're both originally from the Prairies. We both grew up in Winnipeg. Later on, we moved to Saskatoon, so we spent quite a bit of time in the Prairie provinces. We think that initially had a great influence on our music, but more recently in 2007, we traveled to Africa, and that has really had a strong influence on our writing. Right now we sort of have a combination of our Prairie roots and our travels to East Africa. 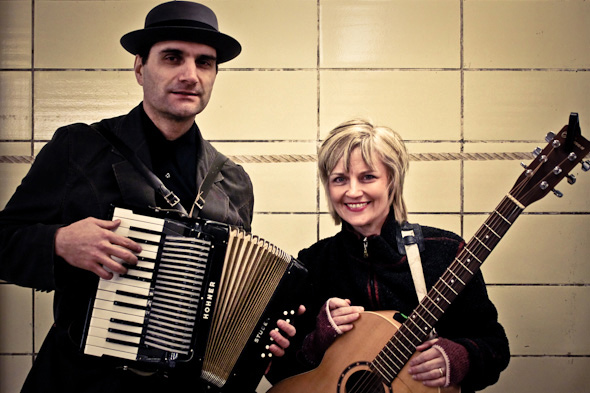 What were you doing in Africa?

Dwight works for an organization called Canadian Physicians for Aid and Relief (CPAR) that does work in East Africa, so he has to go every couple of years to visit the projects that they have underway. In 2007, Sue went with him, just for the experience. It was really a life-changing trip, and that's when Sue started her songwriting.

We had so many great experiences there, meeting people and meeting children. It was wonderful to actually get the chance to talk with these people and see the way that they live, and some of the hardships they have to endure, and yet they have such positive outlooks on their lives. It really does make you look at your own life in a different way and appreciate the things you have more.

Do you travel a lot? Where else do you go?

The only other traveling we've really done besides Africa has been for performing. We've done a few tours out west, in Manitoba, Saskatchewan, and Alberta.

Why did you become TTC buskers and how long have you been part of the program?

It's a great way to get exposure to a lot of different people. When you think about it, there are probably a million people who pass though the subway system every day, so you're going to be exposed to people who might not otherwise have a chance to see you perform. Our first year was the 2005-2006 season, so we're in our fifth year now.

What's the most fulfilling thing about TTC busking for you?

The songs that we write really have a message to them. We have a social justice side to our music. The overall joy comes from being able to get that message out there and have people listen to and respond to it. We also just find it so rewarding to have people walk by and give us the thumbs up, or tell us that we've brightened their day somehow. It's a really positive experience.

We've met a lot of great people. We've had people end up coming out to our shows and becoming regulars at our gigs. Those people are always a joy to talk to.

A month ago Sue was busking at Queen station, singing a love song from our first CD. This young fellow stopped, and at the end of the song he came over and asked if she would redo the chorus and sing it into his cell phone, because he was going to call his girlfriend in India. When she finished singing, he said to his girlfriend, "Did you like that?" Then he looked at Sue and said, "She loved it!" It was nice to be a part of their romantic exchange.

One time we were busking at Spadina station, and a woman put a beautiful bouquet of flowers into our guitar case. She said, "I don't have any money, but I thought you might enjoy these."

There were enough flowers in that bouquet that Sue was able to put them in three different vases that night. We were just surrounded by flowers for the next few days, and it was just such a beautiful thing.

Watch Sue and Dwight perform Marching by Sue Peters below.