After profiling TTC busker Mel Harrietha last week, I thought I'd check out his buddy Leo Zhang, a cellist and fellow subway musician.

"We are worlds apart at first glance, and have been called 'an unlikely pair' and 'the odd couple'," said Mel. "But we play together like we have been doing it for years."

Leo and Mel normally perform as separate acts, but I'd heard about the odd underground busker jam session and was curious to see one in action. I decided to meet the two friends in the Spadina station busking hot spot and get to know Leo a bit better, hoping that while I was at it, I'd witness something cool.

I didn't. I witnessed something brilliant.

How long have you and Mel known each other? What made you decide to perform as a duo?

Mel and I met two months ago. He was playing at Bloor and I had my gear. I thought, "He sounds pretty good!" Whenever I passed by him, I'd sit there for maybe ten minutes, listening to him play. His music has a Spanish feel, and I have a lot of passion for Spanish music. So when I jammed with him, we really blended well. The first or second time we jammed together, people asked us, "You guys play together a lot?"

I've been trying to play with many different musicians, but mostly, I play with Mel. We're two pieces that fit, like an apple, you know? Even though one side is green and one side is red. We're normally solo performers, but this is the 22nd time we've played together.

What's your musical genre? What genre would you say you and Mel become when you play as a duo?

When I'm alone, I play classical. But recently I've started playing some jazz, blues, and even heavy metal. I used to have kids come up to me saying, "Play something cool!" I found this group, Apocalyptica, a group of heavy metal cellists who play Metallica and stuff. So I started doing that, and kids started saying, "That's sick, man!"

Mel and I do a bit of everything. Original, contemporary, jazz. But we always have that Spanish flavour. That's the most important part. It's the ingredient that brought us together. 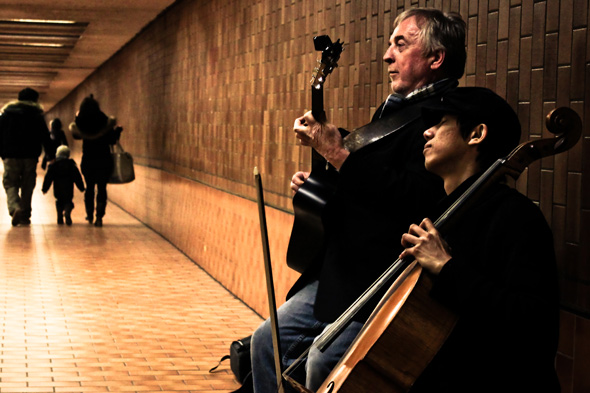 So, tell me a bit about yourself. Who is Leo Zhang?

Well, as you know, I play the cello. I went to Earl Haig Secondary School. I come from a family of musicians: my dad's a violin professor, my mom's a pianist, and my sister's a violinist. I actually started on the violin when I was little, in China.

How long have you been playing the cello?

Why did you switch to cello from violin?

When my parents immigrated to Toronto in the early '80s, they could only bring one child. My parents took my sister to Toronto, I stayed in China. Since nobody was there to teach me violin, I switched to cello.

I heard that you were in China last week. What were you doing over there?

I was auditioning for the principal position of a new orchestra, the National Chinese Performing Arts Association orchestra.

How did it go? Do you think you have a shot at it?

The competition was pretty tense, but I did my best. I think I have a decent shot, but that's not the important part. The important part is the experience, and improving every day. I was classically trained; I learned to read music the way it was written. I was never good at improvising. Busking has been a way for me to learn. Now, I can hear something, and right away I can play something over it. 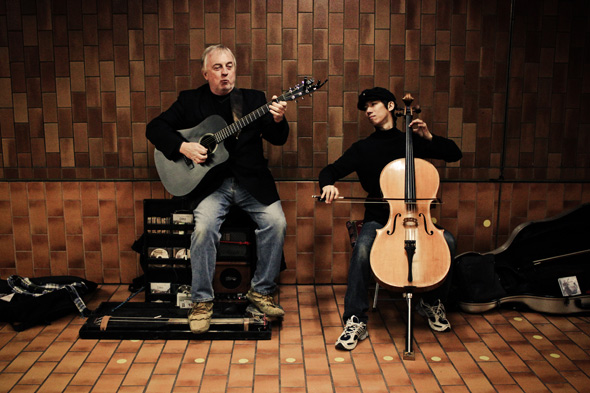 Why did you become a TTC busker? How long have you been one?

I've been a TTC busker for six years. In high school and university, I would perform for recitals and competitions, and I would get performance anxiety. I tried to find ways to counter that. I saw other people playing in the subway, so I gave it a shot.

I think playing in the subway helped me in many ways. It helped me get rid of my stage fright because thousands of people pass me every day, and every day you're putting on a show. People will listen for one minute, five minutes, and sometimes they'll sit there and listen for an hour.

I also teach cello and music theory. My mom teaches piano, and all of her students study music history and theory with me. Teaching makes up most of my income, but busking is also fun, and I make a little money, so why not?

I've had people steal money from my case. Actually, in my first year, I'd forget to take out my money and people would come by and swipe it. I've learned my lesson. Now I don't usually leave much out.

Those bad occasions are rare, though. Once, I had a juggler stop by, and he started juggling to my playing. Next thing you know, we've made a lot of money. So I said, "Okay, half of this is yours."

A lottery ticket. I actually won with it. Not much, but I won.