Tropics and Sun Ra Ra can eat up your sanity and replace it with the desire to dance. Last night at the Silver Dollar was like a lunatic asylum talent show. That's not a bad thing, though. Who doesn't like a good old freak-out now and then?

Also playing the show was the ever lovely introspective Gates Gates Gates (with ex-Cuff the Duke and ex-Postage Stamps members), Tonka & Puma (who were awesome!), and Racoon Wedding (Brampton natives and loud rock enthusiasts).

Bringing together the barrage-of-beats drumming of Simone TB (who also drums with Grasshopper and 10,000 Watt Head), and the overt quirkiness of Slim Twig, Tropics manage to be louder than the three other opening bands combined. I like Tropics because they sound like death; an artsy pseudo-violent knife fight. The drums are the heart beats, pumping the blood out, and the guitar riffs are the the stabs inward. 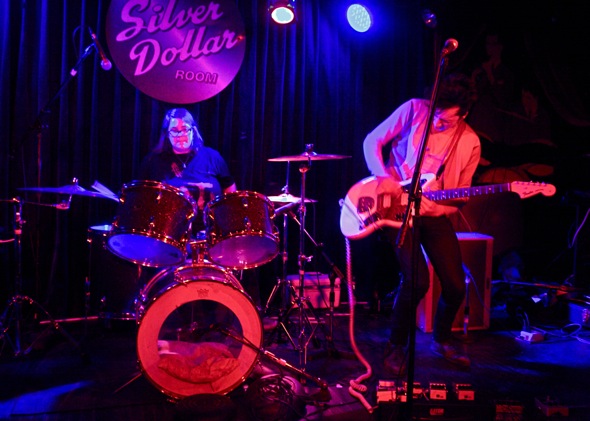 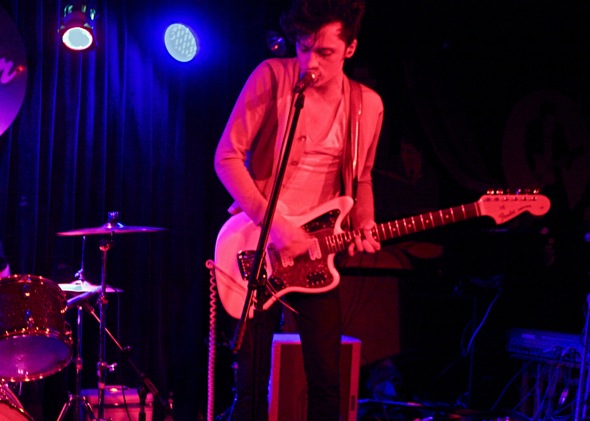 Very few people in Toronto can drum with such voracity as Simone - she sounds like Hella drummer Zach Hill. Her insane changes and kick drum antics force you into a frenzy and then the seven guitar pedals that Slim employs loop you into a fantastic nightmare. I don't think there's been one time I've seen Tropics that at some point in the show there wasn't some kind of technical problem. But it adds to the overall show, you know? Slim destroys everything in his path when he's up on stage. He squirms and squeals around the mic with a jagged fervour. They're chaotic and not dependent on one another to make it that way. It just seems to flow out them. 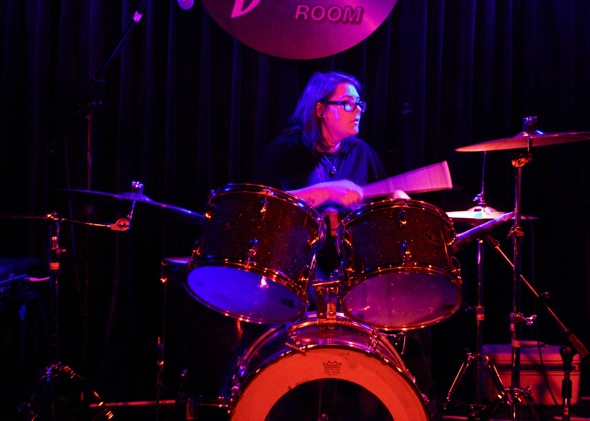 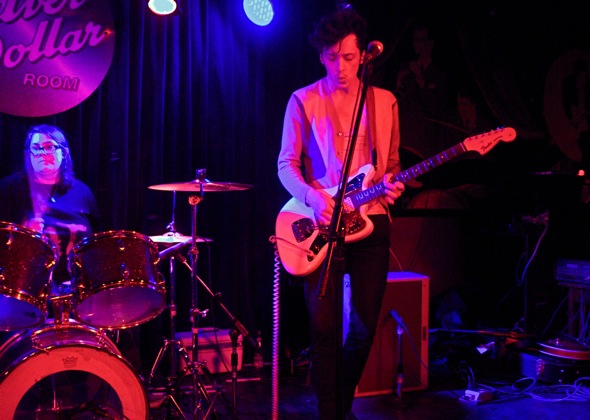 One of my favourite things about the band is that the sound they produce live (the tropical punk storm) is kind of down-played in their recordings. Listening to the split release they put out (with 10,000 Watt Head), I get the feeling that they could easily make a soundtrack to a 1980's Korean horror flick. It's really catchy and 'groovy' (not in a Grateful Dead sense of the word), but something happens when the songs are preformed live. They sound way more insistent and crazy.

I can't really place any of their direct influences, which is nice, but there is a bit of The Flat Duo Jets (North Carolina's best export of the '90s) in them. Apart from the fact that both bands were both just drums and guitar outfits, Slim's vocals sound a lot like Dexter Romweber's. But Tropics are way heavier than the Jets; much more punk influenced than 50's rock n' roll. 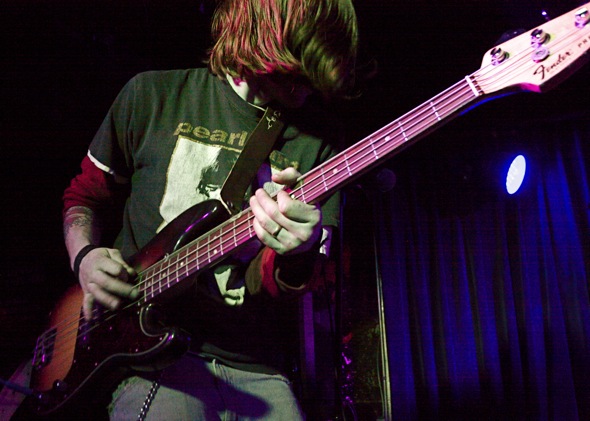 Sun Ra Ra are from Peterborough, a city which brought us I Mother Earth and The Burning Hell. A quiet university town settled in the gateway to Ontario's cottage country has bred a truly psychotic live band. The bass player spent half the show in the crowd, and for one song played long after the rest of the band was done. They eventually got him back onstage (for awhile). The singer, Danial, had what could be described as a 'violent episode' and spoke in tongues for a spell. He played his guitar with a full bottle of beer in lieu of a pick, and tried to decapitate various members of the crowd with his guitar neck. So, needless to say, these dudes are high up on my list. 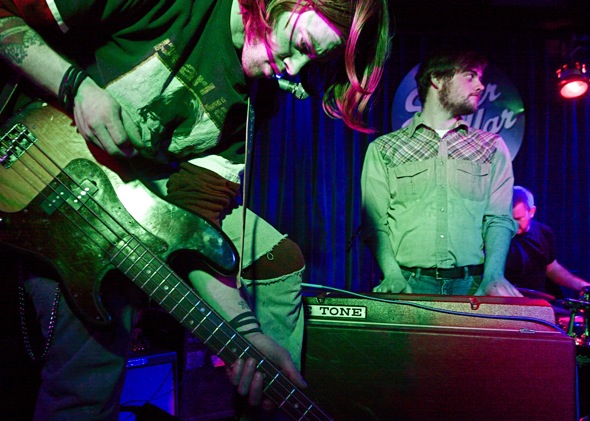 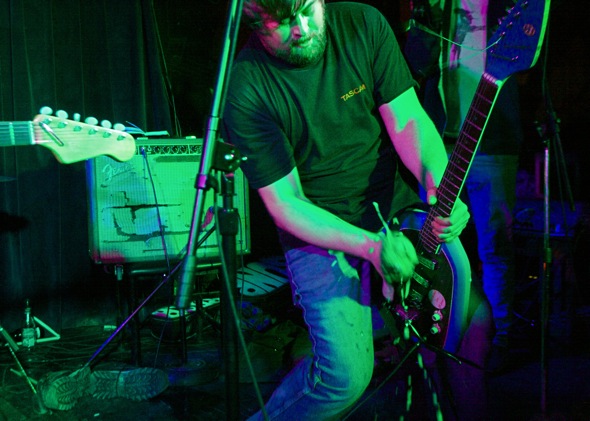 The last time I saw them was at the 6th annual Poster Show (which was dedicated to the memory of Poster artist Michal Majewski) in September, and their antics both impressed me and made me want to be as drunk as they were. But last night was nuts. Quite a few people took off after the tropical storm was over, but those who stayed knew what they were in store for. Sun Ra Ra is like The 13th Floor Elevators (a beyond influential 60's psych band from Texas) on a ton of pure drugs. These guys look and sound exactly what it's like to be 100% in the moment. They command your attention and make it worth your while not to look away. Plus they use a super wicked old school Ace Tone organ, which sounds amazing - when it's not being pushed over by various members of the band. 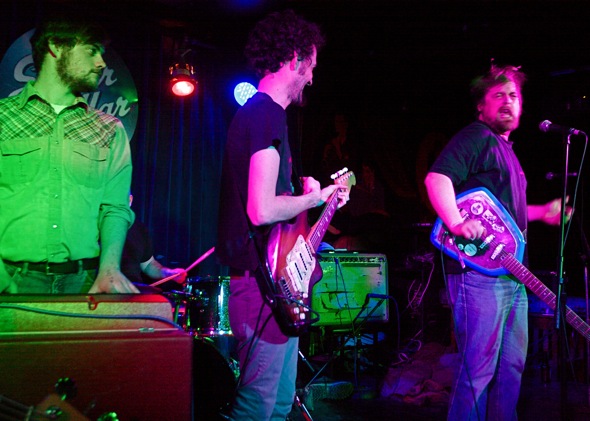 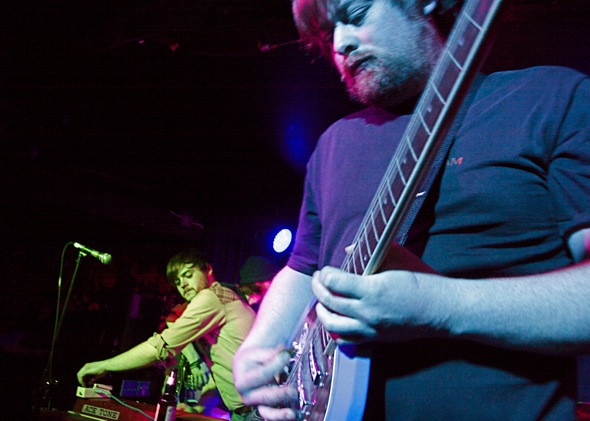 While cleaning the beer and sweat off my camera this afternoon, I couldn't stop replaying the show in my head. The Silver Dollar and its grimy funk, broken glass-covered floors and legendary shows make it one of the best venues in the city. Having Dan Burke as the man in charge of planning all the madness doesn't hurt either. Obviously, he knows how to put together a great show, and a lot of people are really appreciative of that. He may be a wild card, but he's pretty much consistently on the mark with what's going on in the Toronto music scene.

More photos are over on my blog, Ivy's League.