When the Garrison opened its doors last weekend, it gave Dundas West one more reason to glow with the rosy glow of "it" neighbourhood vitality. While the intersection of Ossington and Dundas already boasts a music venue, the arrival of the new club brings the indie sound and sensibility to an area so far musically defined by the country twang of the Dakota.

Whatever the Garrison comes to mean for music in Toronto - with less than a week in operation, it's probably unfair to call it anything yet - it definitely signals a long overdue shift west of the city's musical heartland. It was way back at the turn of the '90s, after all, when Queen West gave way to College Street, and for much of that time one grungy little bar, Sneaky Dee's at Bathurst, has been the default epicenter.

Shaun Bowring, the booker abruptly dismissed from Sneaky Dee's last February, is a partner at the Garrison, and acknowledges that the club's location is more a matter of following, not leading, a trend. "It's nice to be in a neighborhood where people live," he says." I think Ossington or Dufferin are more 'central' in that regard. Cities are always pushing outward from the core." 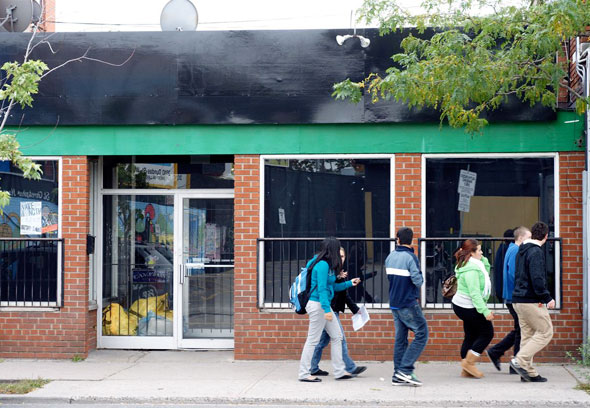 Wavelength, the music series co-founded by Duncan MacDonell, has lived most of its life at Sneaky Dee's, but it's moved its residency westward to Sunday nights at the Garrison. (The name, by the way, comes from the long-buried creek that flows beneath the area, not some military facility.) It's been ten years since the series started at the short-lived Ted's Wrecking Yard, and began showcasing hard-to-classify local acts, some of whom - Broken Social Scene, The Constantines, The Hidden Cameras - went on to bigger things and sometimes, like BSS, returned to Wavelength to repay the favour.

"Even at Sneaky Dee's my point of time was that we were just biding our time between venues, and we happened to stay in our tent city for seven years instead of just one or two," MacDonell tells me.

"We had a lot of fun at Sneaky Dee's, not because the building was neat, but because we trusted Shaun because he never stole money from us, which is pretty rare in rock and roll. And we knew the security guys and the sound tech and I would always have an uncomfortable banter fight back and forth when I was talking onstage, and it was a lot of fun. And bit by bit those people left, and it just seems like a miracle that the Garrison has the same door staff, the same bar back, the same sound tech - pretty much anyone who got fired or suspended at Sneaky Dee's is at the Garrison now."

"It's nice to have a safe place, though, and that's what we hope to see at the Garrison," MacDonell says, quickly adding that, "I don't want to build expectations too high for that place, or it'll be no fun to attend it."