Thee Oh Sees Made Me Put Down My Camera and Dance

Thee Oh Sees have been around for about 12 years, have made something like 9 albums, and they're absolutely intoxicating. I will personally come to your house and play you their newest album "Help" if you don't believe me. I'm not kidding. I'm not religious, but if there IS a heaven, I want them on repeat when I get up there until a few saints start a cover band called 'Poison Finger' (Track 12 off The Master's Bedroom Is Worth Spending the Night In).

On tour with Thee Oh Sees are The Fresh & Only's, also from San Francisco. Toronto's own Teen Anger and Detroit's Gardens were also part of this spectacle. This concert was a top contender for best show of the year, in my books at least.

It's 3:30 am, and I just got home from Thee Oh Sees at Wrongbar. I couldn't wait until a more reasonable hour to start editing my photos from tonight. It needs to be said that this show (ok, and Butthole Surfers tonight) is the reason why I didn't go to Pop Montreal. I opted out of 5 days of our country's (arguably) best music festival to see this band. And I'd do it again in a second. 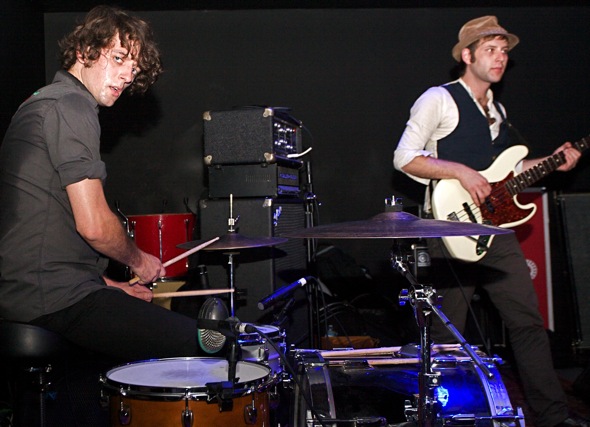 The first band to play was Gardens, who have the saddest story about how brutal their hometown of Detroit can be. Listen to this, drummer Julian just sold his car for a van so the band could go on a huge 3 month tour, and that van was then stolen outside his house the night before they were set to leave. Seriously. The show wouldn't have been the same without them, and I'm really glad they were able to pull some strings and borrow a vehicle to get here.

They have this great Detroit rock sound that just makes you want to shake your drunk ass all over the place. They've really honed that stripped down 70's sound, but have somehow also managed to maintain all the weirdness of the 60's pop explosion. Gardens has a new 7" out on Italy Records, the famed Detroit label run by Dave Buick, and I recommend giving it a listen. 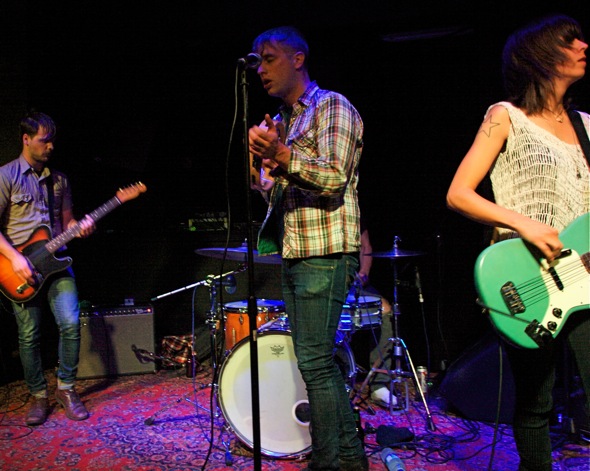 Teen Anger is one of my favorite Toronto bands. The first time I saw them was way back last summer at one of the Extermination Nights; I think it was the one under the Don bridge, and I've been hooked since then. I can't even really pin down exactly what makes them an important local band, but for me I think it comes down to the guitar riff on 'Brain Hiccup' and Chris Swimm's raw and yet somehow bored sounding vocals. Their set consisted of mostly new songs off the record they're currently working on. I got a bit of a sneak listen a couple weeks ago when I went down to Detroit to see them play with Gardens, and their set tonight has definitely progressed even from then. They've gotten kind of slower and heavier than the straightforward punk smash ups they're known for; the sound is more... evolved, if that's the right word. Teen Anger was the best local band to play this show, hands down. 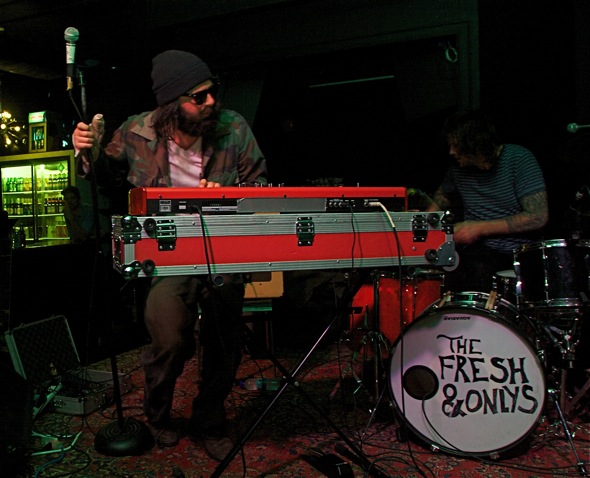 Now I must admit, I gave the Fresh & Onlys the benefit of the doubt based on the fact that they're from San Francisco, and the Bay area has been producing a very specific sounding kind of band recently (which I love): fuzzed out lo-fi, like tour mates Thee Oh Sees, andTy Segall,Charlie & the Moonhearts,Okie Dokie... the list goes on.

The Fresh & Only's don't really fit into this category though. They're quieter, quainter, quirky even. That being said, I'm partial to almost anything with an organ and a big sound, and they do have that. Despite the fact that everyone at the show was waiting to see the next band, I think they played a great set. I honestly wasn't picturing a big heavily bearded dude in Ray Bans as their singer, but they won me over. 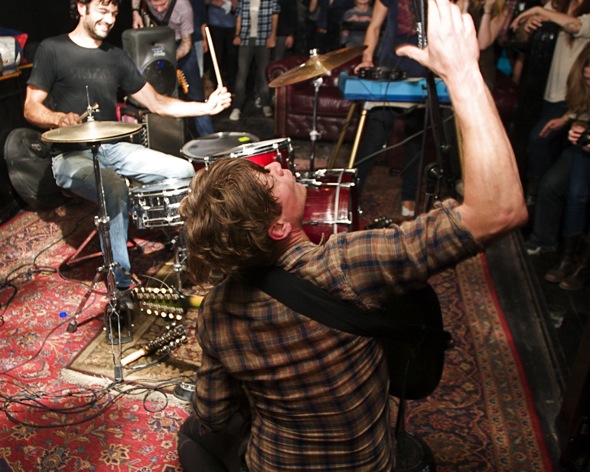 So having read the first paragraph of this review you already know how I feel about John Dwyer's brainchild, Thee Oh Sees. I think they're great. But I must admit that I thought the band was incredible based solely on the power of the records and word of mouth, but I now know this is nothing compared to seeing them live. They're epic. Everyone who was there should thank Mark Pesci and Jon Schouten for agreeing over a year ago to make a Teen Anger/Thee Oh Sees show happen. 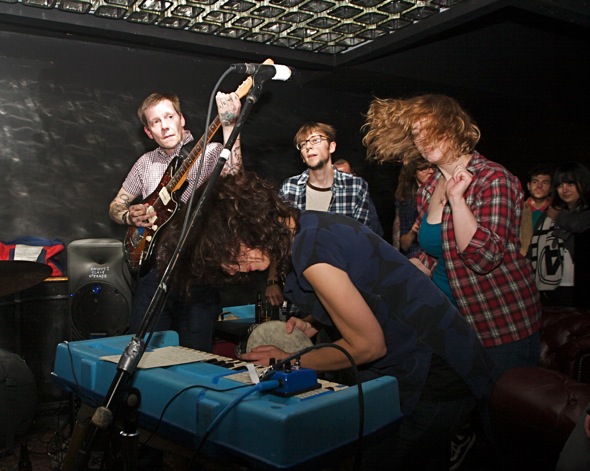 The band set up not on the stage, but on the lounge area beside it. It was impromptu and set the mood for their show. Everyone I saw looked excited and intrigued -- like "holy shit, this is actually happening".

I usually gauge how much fun I'm having at a show by whether or not I feel compelled to put my camera down and lose my mind dancing. Suffice to say, my camera was on a table almost as much as it was in my hands. "Enemy Destruct", "Block Of Ice", and "Maria Stacks" were my favorite songs (more like freak outs), but everything kind of melded into one giant ice cream cone in the sun. I really do think Thee Oh Sees are one of the best bands out there right now. 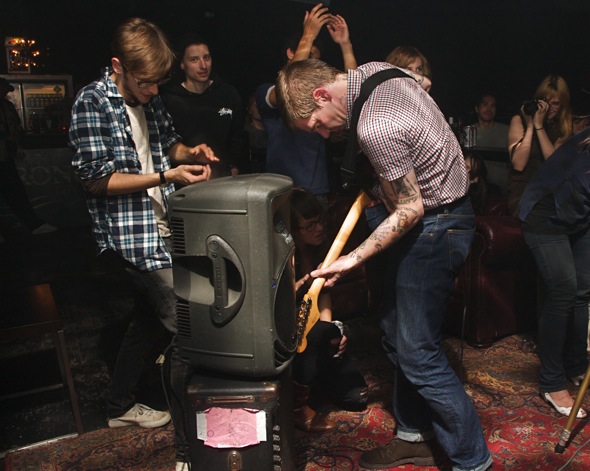 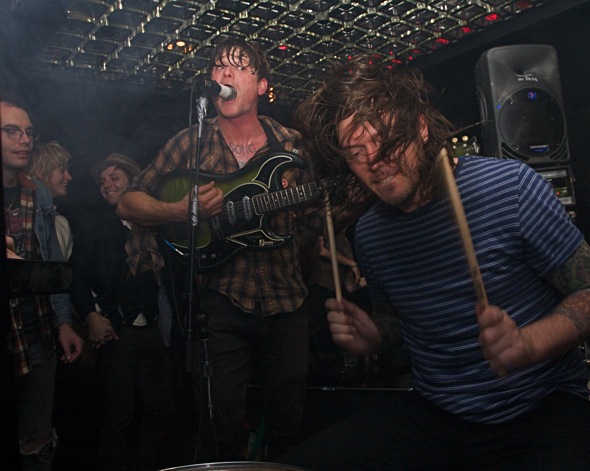 for more photos check out my blog at ivyleah.blogspot.com