THURSDAY OCTOBER 29 / THE BITTERS / SNEAKY DEE'S / 431 COLLEGE ST / $8 / 19+
Sneaks hosts the FUCKED UP FESTIVAL 2009 KICK-OFF show featuring plenty of local talent like THE BITTERS, LITTLE GIRLS, THE MELIGROVE BAND, DANGER BAY and METZ in addition to Minneapolis, Minnesota's FRANCE HAS THE BOMB. A spectacular line-up for a remarkably low price, this show marks the beginning of what promises to be an incredible weekend for punk rock and hardcore in the city of Toronto.
myspace.com/bittersband
myspace.com/metztheband
myspace.com/dangerbay
myspace.com/francehasthebomb
myspace.com/littlelittlegirls 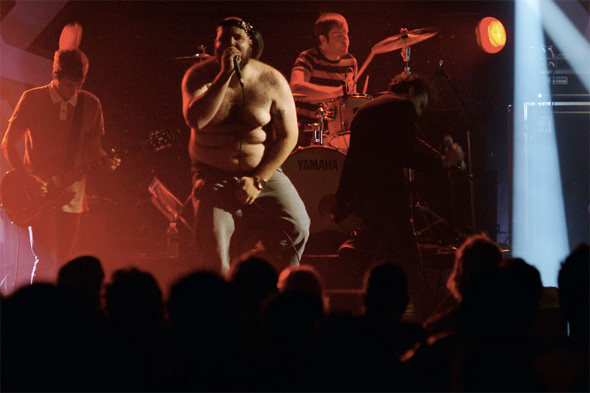 SATURDAY OCTOBER 31 / NOAH & THE WHALE / HORSESHOE / 370 QUEEN ST W / $15 / 19+
Alternative-folk rockers NOAH & THE WHALE headline the Horseshoe on Halloween, encouraging attendees to dress up as their favourite dead celebrity. The London, England-based group are only a few years old but already have two solid full-length albums under their belt: 2008's Peaceful, the World Lays Me Down and their critically-acclaimed cinematic follow-up, The First Days of Spring released a mere three weeks ago. Opening act is 21-year-old singer/songwriter ROBERT FRANCIS, touring in support of his latest opus Before Nightfall. Francis was given his first guitar by RY COODER and spent years as a pupil of JOHN FRUSCIANTE, a pairing that moulded him into a talented and emotive songwriter wise beyond his years.
natwofficialblog.blogspot.com
robertfrancisofficial.com

SUNDAY NOVEMBER 1 / THAO WITH THE GET DOWN STAY DOWN / EL MOCAMBO / 464 SPADINA AVE / $10 / 19+
San Franciscan THAO NGUYEN brings her indie-pop sensibility to the El Mo, fresh off the release of Know Better Learn Faster through Kill Rock Stars. ADAM and WILLIAM THOMPSON comprise THE GET DOWN STAY DOWN, Thao's rhythm section. Opening acts are labelmates PORTLAND CELLO PROJECT and Richmond, VA's DAVID SHULTZ & THE SKYLINE. Expect to hear some catchy folk-rock with a beat-boxing twist or two courtesy of Thao herself.
thaomusic.com
portlandcelloproject.com
myspace.com/davidshultz

MONDAY NOVEMBER 2 / MONSTERS OF FOLK / MASSEY HALL / 178 VICTORIA ST / $36.50-49.50 / ALL AGES
MATT WARD, JIM JAMES (MY MORNING JACKET), CONOR OBERST & MIKE MOGIS (BRIGHT EYES) are the parts that when added together form indie supergroup MONSTERS OF FOLK. This show promises a mix of material from their self-titled debut as well as individual classics from each artist. The Monsters boast a cohesive and vibrant sound that has drawn worthy comparisons to the TRAVELING WILBURYS and CSN&Y.
monstersoffolk.com/

MONDAY NOVEMBER 2 / THE MISFITS / REVERB / 651 QUEEN ST W / $39.50 / ALL AGES
Horror-rock legends THE MISFITS just recently released their first new material in over a decade, and they'll headline the Reverb to celebrate. Joining them are Burlington, ON's THE VIDEO DEAD (download their entire discography for free here) and local punk-rockers THE NIGHTMARES. Show was originally planned for the Phoenix - tickets are still valid at the Reverb.
misfits.com
myspace.com/thevideodead
myspace.com/thenightmaresmusic

TUESDAY NOVEMBER 3 / DAN DEACON / SNEAKY DEE'S / 431 COLLEGE ST / $12 / 19+
P4K-approved experimental indie-electronic artist DAN DEACON plays the Great Hall on November 4, but I'm willing to bet that the Tuesday night show at Dee's will be absolute party mayhem. Spastic experimental rockers NUCLEAR POWER PLANTS will open up for Deacon at both dates. Bring a towel, because upstairs at Sneaks will leave you sweating buckets, even if you aren't dancing.
dandeacon.com
myspace.com/nuclearpowerpants

For more music listings, head on over to our events calendar.