"Aw, it's like I've got the choir of Toronto backing me up," remarked Spektor after the first song. But then it got tiresome.

The hordes of teenage girls in the audience almost ruined it for the rest of us, singing along not only during the chorus, but throughout the entire song. Did you come to hear Regina Spektor sing or to hear yourself sing along to every song?

The real back-up, often featuring violin, cello and drums, worked well. Especially with the songs On the Radio and Us. Spektor showcased a handful of songs from her latest album, Far, which translated well live for the most part, were it not for the crappy venue. 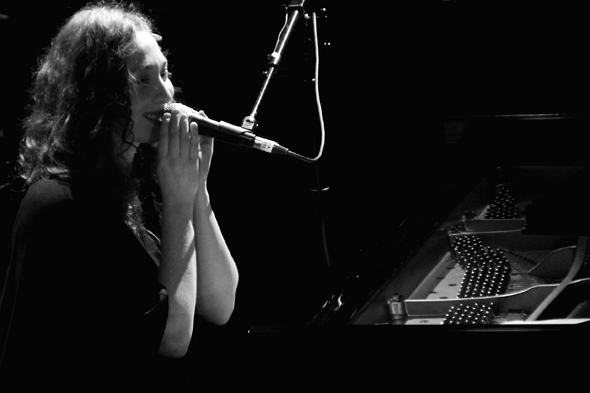 If you're still wondering -- like Matt Damon in the recent TIFF film, Informant! -- "Who the hell names their daughter Regina? That's a city in Saskatchewan." Regina Spektor is a Soviet-born, New York raised singer-songwriter and pianist whose vocal gymnastics can easily astound. Her quirky delivery, coupled with storytelling-like songs pack a mean punch.

It's a pity that the venue ruined it for me. Sound Academy, formerly The Docks, is far from ideal for a concert: Poor sight lines due to a tiny stage at the end of a long and relatively narrow hall. The harsh lighting, due to two, too-bright spotlights constantly shone from too far back, didn't help things. And the venue itself is in the middle of nowhere, with no regular TTC access.

I've seen Spektor three times before: at The Mod Club in April, 2006 at The Phoenix in October that year, and at Kool Haus in October 2007. While it's understandable that the talented singer's following is getting larger with each tour, the venues she's played at are getting worse each time. After this show at this crappy excuse for a concert venue, I swear I'll never go to another show there ever again. Spektor is now much better suited to play a venue like Massey Hall.

"Wow, there's so many of you out there," said Spektor, a few songs in. "I hope you're all drinking plenty of water."

I found that remark kind of odd. But, after being packed in like sardines near the front-half of the venue, I made a beeline to the bar to get a cup of water myself. Then I wasn't allowed back into the main concert-watching area. The security were too eager to keep the drinkers separate from those too young to drink at this all-ages show.

Back on stage, Spektor took turns at the Steinway grand piano, where most of her compositions shone, to an electric keyboard, guitar and even a solitary drumstick and chair for the song Poor Little Rich Boy. Her most poignant moment was when she was back at the piano, singing Apres Moi, totally engrossed in the song, which features a verse in Russian.

The show's opener, Little Joy had to cancel last minute due to flight delay problems. Filling in admirably was Spektor's back-up musicians, violinist/keyboardist/guitarist K Ishibashi and cellist Dan Cho. Ishibashi is in a band of his own called Jupiter One, who just released their new album Sunshower on Tuesday. It was a pleasure watching him sing and play the violin at the same time, backed by Cho on cello.

"K saved the day," proclaimed Spektor, who told us she was "a lucky bastard" to have such flexible, talented bandmates. Too bad Sound Academy couldn't save the concert.