Patrick Brealey Makes Me Want to Go to Church

Whenever I meet someone who's thirty or under, actively creating folk music (or some variant of the genre), I'm always somewhat puzzled. I am generally interested to know their motives, and I wonder how they got into it. I guess it's like finding out that someone plays the harp. So, I have at least one question to ask Patrick Brealey.

With the release of his second album, Mercury in Songbirds, and an upcoming show at an interesting venue that I've never been to, I now had at least three good reasons to sit down with Brealey in the corner of an Ossington favourite, the Communist's Daughter.

Having just moved to Toronto from Vancouver, Brealey is fairly new to the city. After releasing his first album out of his former city, he told me that he decided to pack it up and re-open shop here. 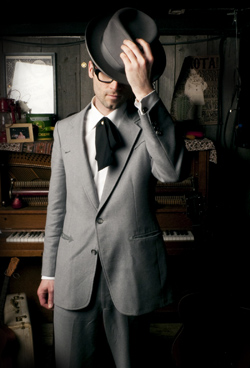 "Yeah, it was actually music that brought me here. I played a show two years ago at the Dakota [Tavern] and realised that for what I wanted to be doing this would be a better place. I think [Toronto] is just a better place for me. In Vancouver, there's a lot of music too, but people just tend to stick to their little groups and there's not a lot of cross-over. It's just a different community here."

Brealey will be hosting his CD release party on Friday, September 18, at the St. Stephen in the Fields Church. Personally, I have never been there. In fact, you could say that I'm incredibly uninformed when it comes to Toronto churches, but it's definitely a venue that caught my attention and so I asked him about his selection process.

"I don't know. I want important shows to have a unique feel. It's good to have a show at a bar or club, but this should make it more of an experience for the audience. They're going to a place that they don't really know. When I released my first album, my CD release was at a converted funeral home. I just want people to feel like they're going to a show, not just another night at the local bar."

Mercury in Songbirds is a pleasant listen. From the immediately like-able 'I Don't Want to Hear Another Love Song' to the soothing blues track 'Something to Do With You,' Brealey's voice and lyrics propel you through the entire album in a manner comparable to Lyle Lovett.

I asked Brealey if he had always been into this sort of grassroots, folk-blues genre and if so, how difficult it was to find people to jam with.

"I have personally, and that's how I started writing songs, in this genre. I think I fought it for awhile -- it just didn't feel like the right music to be making and playing. You know, old country stuff. I played in some indie-pop bands, which I had a blast doing, but there was always something else. I would never write songs like that."

After this Friday, Brealey will tour for a month out West. And if all goes well, after that he hopes to play the East coast of Canada for the first time in his career.

Lead photo by Urban.Hermit of Flickr. Side photo courtesy of Must Be Santa.