After several weeks of dismal ticket sales and a slough of complaints from the fans, Virgin has made a rather significant change to the Ontario Virgin Music Festival. The festival will no longer be held at Burl's Creek Park, Orillia, and will instead move back downtown - to the Molson Amphitheatre for its two-day show on August 29th and 30th, 2009.

This is a MAJOR announcement, considering the big names associated with the festival and sponsor line ups. It also means a big change in tickets for fans, both in terms of price and access. Ultimately, it means that Virgin may be in its final throes of Festival management on this side of the pond. Read on to see just how this logistical shift is going to affect Vfest 2009 and your ticket.

Most notably, Virgin Fest '09 will move to the Molson Amphitheatre; which means no more camping, no more shuttles, and hopefully no more complaints from fans who originally thought they'd have to trek to Orillia to see NIN's final North American performance.

In speaking with Virgin Music Festival Director Andrew Bridge, this move was simply a logical choice based on complaints from fans. I can't help feel that a likely push also came from poor ticket sales, and lack of ample camping facilities at Burl's creek... a venue which already had promoters concerned over attendance for the struggling festival.

Although Andrew Bridge has assured me that all artists and their management groups were contacted for approval before the move to Molson Amphitheatre was made, it seems the move took almost everyone by surprise. I must admit that despite Andrew's positive outlook, I have some serious concerns over whether all the artists will show up, given the dramatic change in venue. 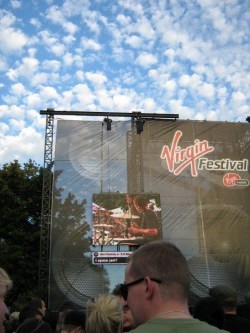 Of course there will be refunds on camping for fans, but if you have already bought a ticket it WILL work to your advantage. The Amphitheatre holds approximately 18,000 at maximum capacity, and only about 1100 will fit into the pit. Anyone who has already purchased a ticket for Burl's Creek is automatically considered to have a 'premium seat' ticket, which will allow entry into the 100, 200, and pit sections at the Amphitheatre. These will be wristbanded, and are somewhat first-come-first-serve given that are guaranteed to be filled to capacity, but this is good news for anyone holding a ticket already.

On Saturday August 15th at 10am, additional tickets will go on sale for the new Amphitheatre seating and fans will need to rush to purchase a ticket to get them into the 100, 200 or pit areas. Lawns will be sold at a cheaper price, at only $39 a day, and all tickets now include access to the CNE grounds (which may help to spread out the massive crowds).

CNE will also host some of the special extras we're used to seeing at Vfest, like massage tents, artist meet-and-greet areas, and a second stage for the smaller acts. Though this will make for a great festival experience, I'm pretty sure that it'll turn into a giant traffic jam given the narrow pathways used to move between the Amphitheatre and the CNE grounds - which will of course be guarded by security checking wristbands upon re-entry, making for very long wait to get back into the main stage area.

I can't help but speculate that this may be the last year for Vfest, which has been losing money steadily since its North American arrival in 2006. The venue change seems to be a sign of desperation for some, and hope for others; at the very least, Torontonians should be pleased to see the event move close to home but not back to the island. The Island was considered, along with Park Place in Barrie, but according to Andrew Bridge the Amphitheatre was simply the best logistical fit given the rapidly approaching festival dates.

At least now that the Festival's moved closer to home, Toronto fans have a realistic chance to see NIN, Ben Harper, The Pixies, Pet Shop Boys and more for as little as $39 a day; plus since it's taking place in the heart of the city, you can be sure that blogTO will be bringing you plenty of coverage of Virgin Festival '09!