On Wednesday evening, I waited outside The Mod Club for over an hour in the drizzling, cold rain, waiting to see London-born Patrick Wolf. There are a few guaranteed facts about Patrick Wolf's live show: there will be costumes, there will be varying degrees of nudity, and all present will be scrubbing away the glitter for a month afterward. However, halfway through the set, I realized that this gig in particular will doubtless remain etched in (even Patrick's) mind for some time.

NOTE: My photos of openers Jaguar Love and Living Things have mysteriously disappeared from my hard drive, but the former moved too much and the latter barely moved at all, so they weren't that great or exciting.

Portland, Oregon's Jaguar Love, composed of Johnny Whitney and Cody Votolato, both previously of Blood Brothers fame, started the night off. Armed with just a guitar, a mic, two cardboard tigers and a laptop, the duo danced across the whole stage. Whitney's vocals are unique, one might say, and sounded mostly like high-pitched screaming, without the usual "hardcore" element. I felt like the band was just a tiny bit out of place, opening for Patrick Wolf, but they were full to the brim of great energy and fun beats. The crowd bopped along right until the end. 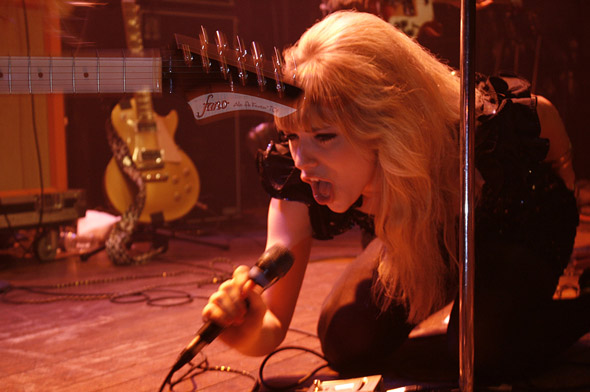 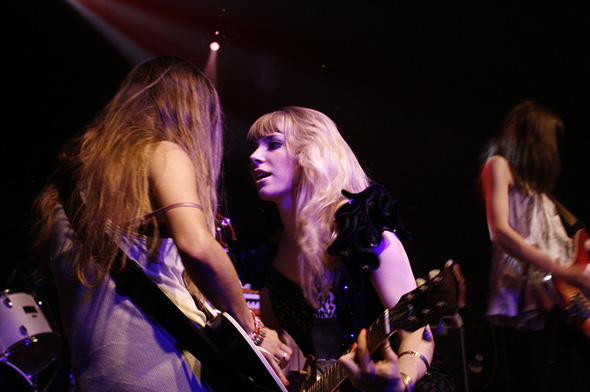 My favourite opener of the night was Parisian girl band Plastiscines. All-female rock bands are becoming slightly more common these days, but with trendy labels such as "indie darling" and the like being thrown around, the girls don't actually seem to do much rocking. And it's true that the women of Plastiscines take great care to look nice and produce upbeat, catchy tunes -- but they also know how to play their guitars, and well. Lead guitarist Marine Neuilly especially captured my attention; she was completely unafraid to wield her instrument "like a man", and dance and move just like the boys do.

The band played songs mostly from their latest album "About Love", as well as a rendition of the much-covered "These Boots Are Made for Walkin'". It fit in well with the slight sixties vibe, and singer Katty Besnard insisted on crowd participation. Plastiscines were an unexpected highlight of the night and I would gladly see them again! 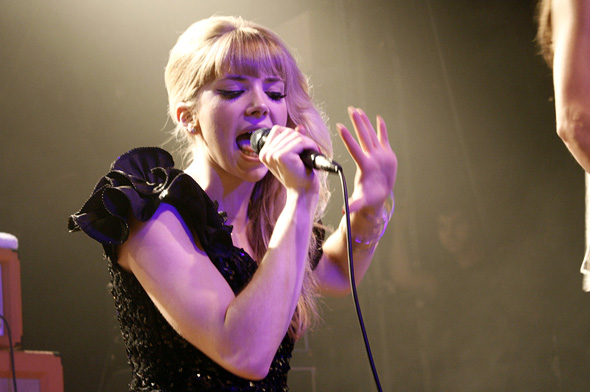 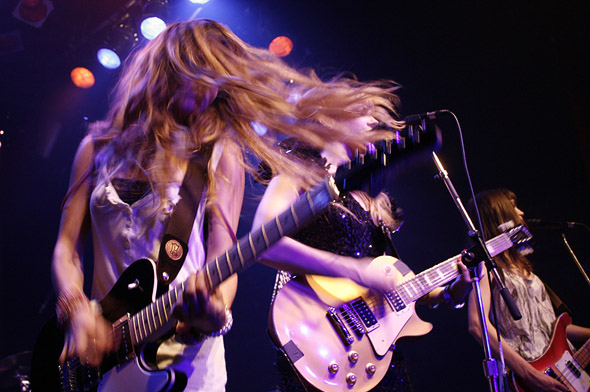 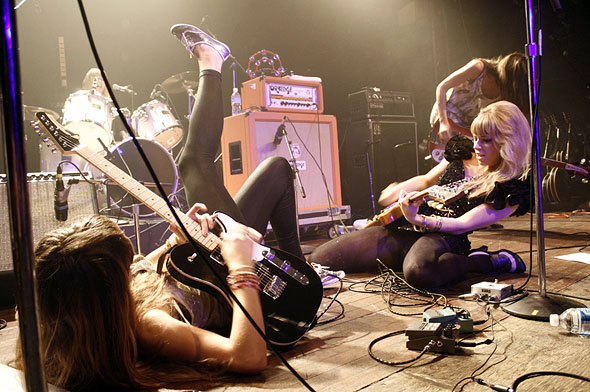 While Plastiscines had raised my rained-on spirits, Living Things brought them right back down again. Perhaps the contrast was against their favour, but the St. Louis band felt like it had a much plainer, and even "older" sound than the previous openers. The crowd that had been dancing minutes before was now standing in place, and several people along the stage had their eardrums covered or their heads in their hands. The drummer, Bosh Berlin, looked like the only band member having a good time. Singer Lillian Berlin seemed to want to emanate a less-enthusiastic Mick Jagger, and I couldn't help but notice that the lyrics sounded rather simple. In fact, the only song I enjoyed at all was "Oxygen" from the band's 2009 release "Habeas Corpus".

The set was at least a little bit saved when Lillian noticed two glitter-covered Patrick fans dancing, and called them onstage. The crowd livened up a little, and the band invited more people to dance. I hate to say it, but their set could not have ended too soon for me. 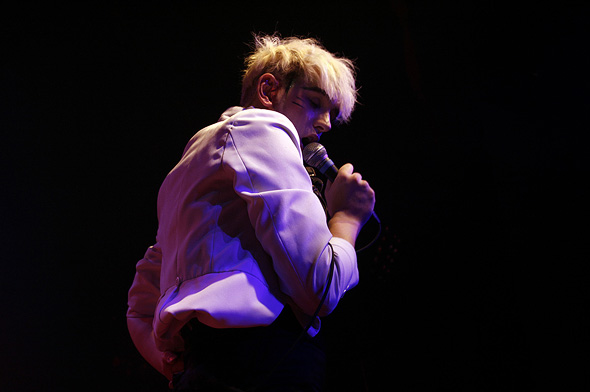 As Living Things left the stage, I could feel the tension mounting. Patrick Wolf has a pretty intense, and rather eclectic, fan-base: glitter-covered teenagers with pixie haircuts, gothic Lolita girls in platform heels, elementary-school-aged children, the typical indie-hipster crowd, and even some that looked fit for a metal concert. Wolf met explosive applause as he hit the stage, and started out with my favourite track ("Oblivion") from his newest album, "The Bachelor". Patrick's music is sometimes a bit difficult to categorize; the only genre I've been able to settle on is electronic folk. With the support of a violinist, a drummer, a double bassist, and two synths, Wolf bounced between an electric guitar, a ukulele, the keyboard, and the viola. 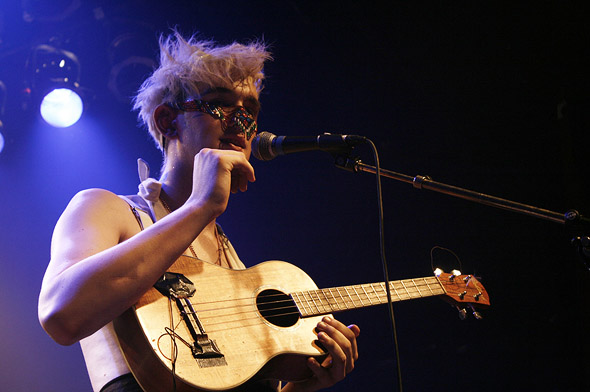 Halfway through the set, just after playing a couple more of my older favourites ("The Libertine" and "Wind in the Wires"), Patrick started on "Tristan", and the crowd went crazy. Wolf mentioned something about his mother asking him not to play the song on this tour, but he smiled and told the audience he would anyway.

Before reaching the chorus, Wolf had picked up his mic stand, sent it crashing to the ground, and stormed offstage. His band continued for a few moments until a stage hand signaled them off. I didn't learn until later that the monitors were not up to par, and Patrick had had enough. 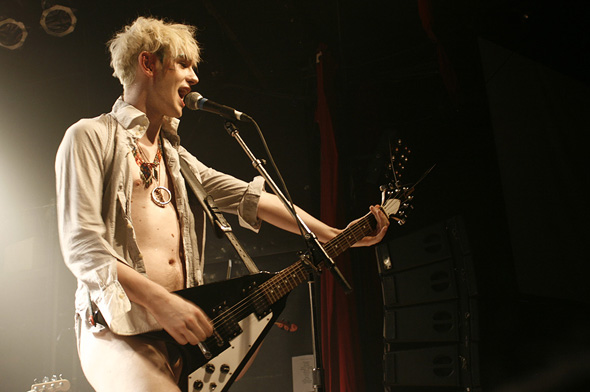 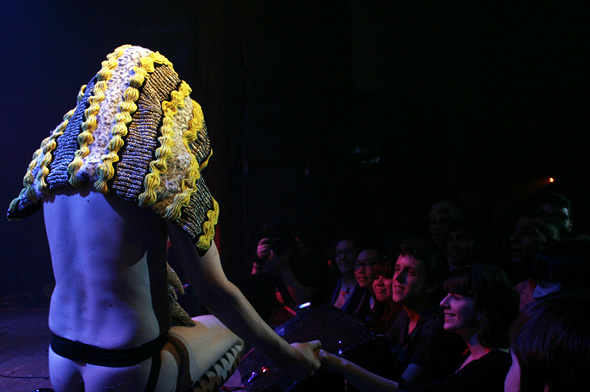 After a second sound check, and after a good chunk of the crowd had left, the band returned. As the night had progressed, Patrick had lost layer after layer of clothing, but when he came back, he was wearing nothing but a dress shirt and a thong-type undergarment. Patrick shouted, "This for all the bands who had to suffer tonight!", picked up his guitar, and went straight into "Hard Times". The mood was lightened with "The Magic Position", after after a few more choice songs, Patrick almost seemed set on upstaging himself -- and the club. Abandoning the terrible monitors altogether, he leapt onto the bar during "Vulture", and right into the crowd for an amazing dance-party finale of "Battle".

I've gotta wonder what the prudish parents think about their kids attending what turned out to be just short of an all-ages strip show. 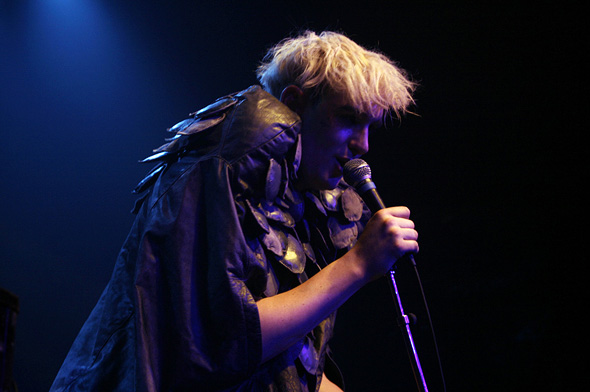 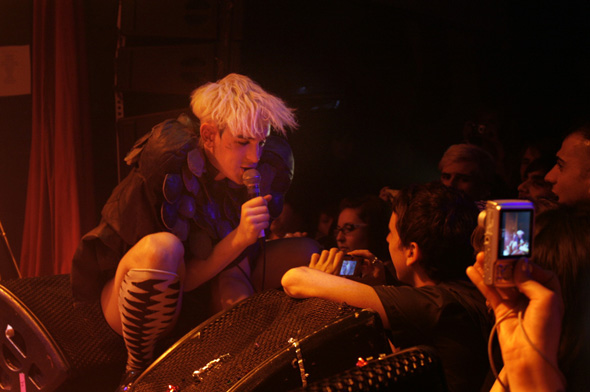 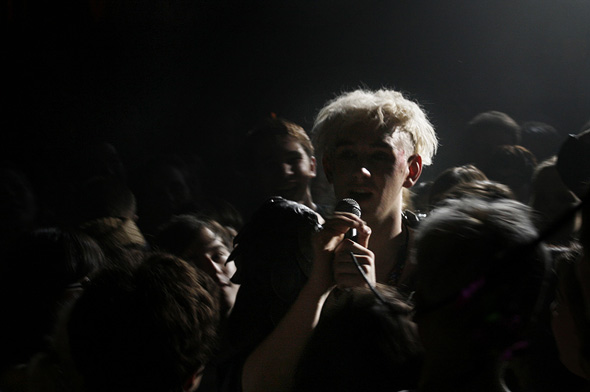