I wasn't entirely sure about what to expect from Marianne Dissard's much-hyped early show on Sunday at Dakota Tavern. Good things had been written. It helped that Bob Wiseman followed the French-born, Tuscon-based chanteuse and her colla-backup-orators (duo Calexico) from a show in Wakefield.

Bob is great, and seemingly everywhere these days. He brought a mean accordion solo to share Calexico's space. Marianne brought a fair presence, a true-to-form throaty alto, and her enchanting French lyrics (but we all know that the French cheat at lyrics). 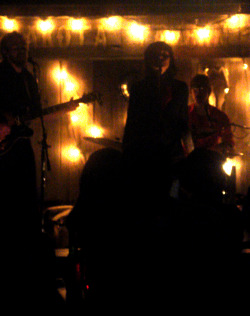 Marianne's vocals have been called breathless, but that makes her out to be a lo-fi chanteuse a la premiere damme (Marianne berated me for the comparison). I'd say she sounds more like a scaled downTetes Raides, especially with Wiseman around (if you haven't heard his live reading of Buster, you're missing out on some serious drole - find it on CBC Radio 3). When I asked her about it, she said, (by email):

In my case, I am influenced by the great chanson tradition.. the Jacques
Brel, Leo Ferre.... but also by British pop, Americana, the great country
chanteurs...." (hyperlinks mine)

Think of a female performer who embraces the poetry of Leonard Cohen and the litheness of a panther - that's Marianne Dissard. The tunes on her 2008 album L'Entredeux were built around her lyrics by Calexico's Joey Burns. Live, she performs with an abandon that compliments Calexico's technique - not AIDS WOLF, try Ida Maria. At one point she asked the audience to find her and the band a place to stay. (They found a place nearby).

It's unfortunate Marianne won't be in Canada after the 23rd - she's hitting New York State, Arizona, and the unlikely bits of Europe for the next little while.

I was serious about the French cheating at lyrics. Listen to something like Grand Corps Malade and tell me they don't have an unfair advantage. 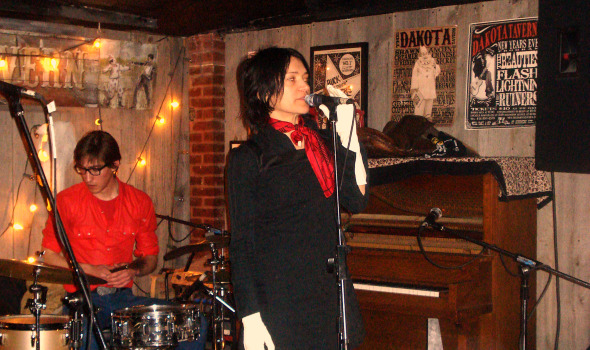