What's in the Box: Night One Packs 'em In

If you plan on going to the What's in the Box evening that gives you five live bands or dj acts for five bucks a night, you better get there early.

Last night the place was at capacity long before headliner Skratch Bastid (pictured above) took the stage. People were lining up to get in and party.

Skratch Bastid really played to the crowd, mixing in everything from Beyonce to Black Sabbath, with a little Beastie Boys thrown in for good measure. 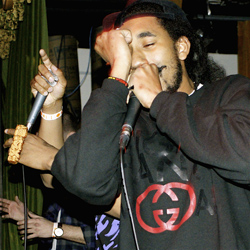 I can't say I was too impressed with Brooklyn's Ninjasonik (pictured above and right) doing the tired old call and response "We say X, you say Y. X, Y, X, Y" routine. But they eventually livened up the crowd with their antics.

I wish I had gotten in earlier in the evening to catch the first two acts. By the time I got through the queue and past the door in The Drake Underground, Syntonics were well into their set.

If you get there well enough before midnight and still get in, you're bound to hear the disco house/punk sounds of Opopo, followed by Vitaminsforyou before headliners Willy Joy kicks into full effect.

And if you can't make it tonight, there's three more nights of What's in the Box, taking you right up until New Year's Eve.