Tom Waits is the kind of musician who has inspired many musicians. A handful of talented local musicians paid tribute to him last Friday night at Hugh's Room.

Similar to the Kate Bush Tribute Night last summer, the Tom Waits Tribute Night was an evening organized by Michael Wrycraft that tapped into some of Toronto's finest musicians.

Among them, Lorraine Segato, formerly of The Parachute Club (pictured above), Gregory Hoskins, Jory Nash (pictured below) and Glenn Milchem (from Blue Rodeo). The songs and the performances were as varied as Waits' songs can be. It made a fun and entertaining evening. 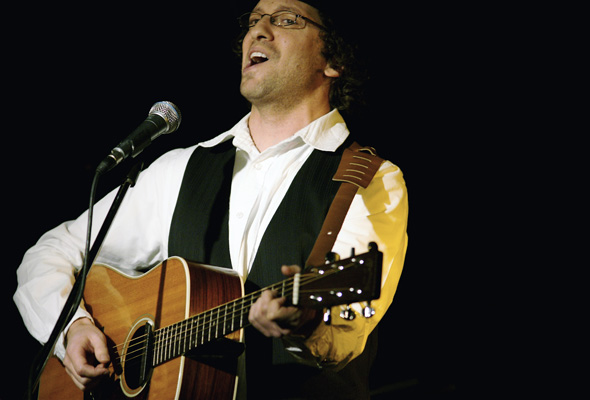 Nash (pictured above) started off the evening with a spirited version of Chocolate Jesus, followed by A Little Rain.

Then we had Michael Johnston (piano/keyboardist of Skydiggers) doing I Don't Wanna Grow Up, favouring a little handheld toy piano over the supplied baby grand on stage.

A few songs later and we had Scott McCord and the Bonafide Truth Horns doing Hang Down Your Head and Rosie. 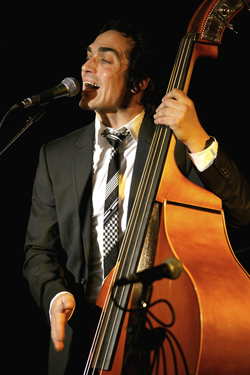 Many of the performers had little anecdotes about how they first got into the music of Tom Waits. A few of them had stories about personal interactions with the musician.

After a brief intermission, John Millard led an audience singalong with Innocent When You Dream in harmony, no less.

Then Milchem surprised everybody by taking the stage with a upright bass, singing Get Behind the Mule and Rains on Me doing an admirable job, especially since it was his first time performing on stage with the instrument (being primarily a drummer).

By the end of the night, the entire lot of musicians went up on stage together to perform Big In Japan.

It was a memorable evening that gave me new insight into the breadth of the music of Tom Waits. A few familiar melodies were reinterpreted and I learned a few new songs along the way.

If I'm not mistaken, this was the third Tom Waits Tribute Night that Wrycraft organized in Toronto. If you're at all a fan of this sort of music, or any of the performers involved, keep an ear out for the next installment. You'll probably enjoy a night of fancy storytelling.

Here's a mini photo slideshow of the performers from the Tom Waits Tribute Night:

It was my older brother who introduced me to Tom Waits' music, back in high school. I think he had the LP of Swordfishtrombone. I remember later really enjoying the song Blue Valentines. I was hooked.

How did you first get into the music of Tom Waits?