The last day of a festival always seems to have some strange surprises in store, and this year's Virgin Music Festival was no exception. Highlights and lowlights ranged from the good (like interviews with Arkells and Shad) to the bad (a 20-foot fall, the abundance of long lines, and of course, the rogue fan that got on stage during Oasis).

The weather is always a huge factor for events on the islands - unfortunately the rain didn't hold off for day two. With no more rain wicking straw in sight, fans were left to dodge the puddles of mud, and do their best to stay dry. Luckily as the sun came out later in the day, everyone's spirits appeared to be high. Almost as high as the psycho who performed a daring climb-a-tree-while-drunk-and-jump-out-at-20-feet stunt to cheering fans in the beer tent (see video below).

Anyone lucky enough to see this stunt first hand must have lined up early for the beer tent, because the line was obscene. The security guards had their hands full with IDing, and had one-out-one-in entry at some points because they were at capacity.

But enough about the details... on to the music!

Day two brought some awesome Toronto talent to this year's festival, both to perform and just to help out. I sat down with hip hop artist Shad to talk about his lyrical prowess, only to be joined by Jahmal of The Carps (who rocked last year's Vfest) who was helping out with the technical set up. It just shows you that the artists really love this event and, lucky for us, want to return again. 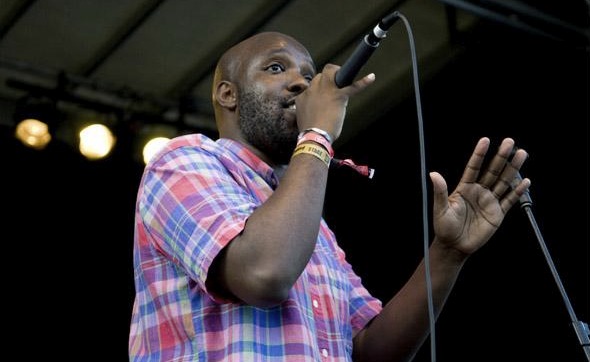 Shad was just about the nicest guy I've met in the music business, with a clear mentality that represents the depth of his lyrics. With a different producer working on each track, Shad's music also has a progressive feel to it - but not quite experimental, because it sounds so well-planned. He has been compared to Kanye, but I think comparing him to Nas, Mos Def, Talib Kweli might do his songs more justice. Flattered by the comparison, Shad took it all in stride, simply stating that he wants to connect to his listeners and make songs that resonate with them.

When asked to name a song that resonated with him that he might like to remix or use, he had a surprising answer: Levis stubs tears by Billy Bragg. It just goes to show you the broad vision of this young artist. Shad will begin a campus tour next week, and is spending most of his time writing new materials. He'll also be performing on September 17th at the Mod Club during the upcoming Manifesto One City Series.

My next stop was the Arkells performance, which ended up blowing away the relatively small crowd. The best part of Vfest is catching bands on the smaller stage, as you can get right up close, and even up on stage in the case of last year's Carps set. The five members of the Arkells barely fit up there, peeling out guitar riffs and jamming around the small stage as the scaffolds shook. Their performance came off as a jam session more than a planned show, and the guys looked like they are loving every second!

You can tell these guys love making music. Mike and Nick explain that the trick is to play live, as much as possible, and of course to make that magic happen with the crowd. Getting ready to release a full length album in October, the guys (also Tim, Dan, and Max) were excited to start touring since they'll get to perform for new fans. Despite their modesty, the Arkells are seriously talented and worth watching out for. The five man band gives off a very seasoned and professional sound and puts on a fantastic show.

NME news reported a suspected fractured rib and pulled ligament after the unsuspecting performer was shoved from behind during his set. I have to give full credit to Oasis for finishing their set, if a little half-heartedly - I doubt I would have wanted to return to the stage after such an incident. Fans were slightly subdued but still chanted along with their favourite anthems. Considering this attack happened with security beefed up to the teeth, it's clear that there are some serious improvements that need to be made to this festival.

In speaking with those in attendance, they felt this was the worst-run Vfest so far. The ferry wasn't so bad but many people were unable to get beer, and also felt that other Toronto events got the better acts. That being said, I'm looking forward to a bigger, better, and possibly relocated Virgin Music Festival in 2009.