The Black Ghosts Scare up a Big Crowd at Wrongbar

UK electro pop sensations The Black Ghosts attracted a big crowd Wednesday night at Wrongbar. Their single "Any Way You Choose To Give It" is everywhere these days and it's one of my favourite tracks of the year so far. I had heard that their live show was unique so I was really interested to see what all the fuss was about.

The Black Ghosts are Simon Lord (from Simian) and Theo Keating (from popular breaks production crew
The Wiseguys). After deserting their respective projects around the same time, the two established artists started fusing their styles together and their self-titled debut album is the result. It's not quite a dance record and not quite a straight-ahead pop record. This fact has made it very likeable to me. Listen for Damon Albarn's vocals on "Repetition". How's that for pop cred?

Theo & Simon's live show was more like a DJ set with a twist. Theo was in charge of mixing high energy electro, breaks and house tracks while Simon handled a bunch of effects and sang over the group's own songs when they came up in the mix. It was a very entertaining DJ set - both guys were loving the music they were spinning and Simon is a great vocalist. 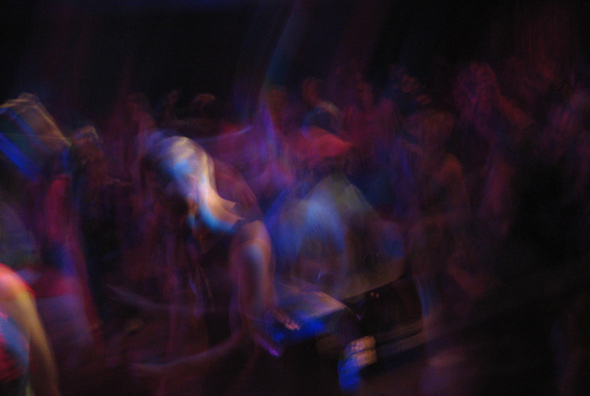 The crowd was great for a Wednesday night. Not only were there lots of people there, but they came to dance. The front of the stage was going off like a weekend and a few people even jumped up on the stage to dance beside Simon as he sang "Any Way..." near the end of their set.

The Black Ghosts will be back. Don't miss them next time.