Drummers are the sluts of the music world. I don't mean they sleep around, though I'm sure they do. I just mean they get around; a good drummer in Toronto will often play in three or four bands at a time. 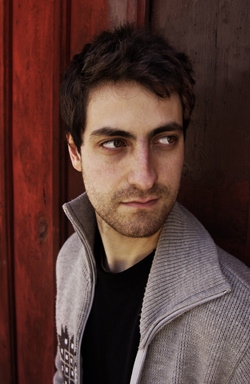 Brandon Valdivia plays in five. He started drumming in his hometown of Chatham at 12 years old; after collecting a music degree at Wilfrid Laurier he packed his bags and moved to the Big Smoke. His current groups include Picastro, Friendlyness and the Human Rights, Place Hands, Not the Wind Not the Flag, and Slowly, Slowly.

Not a showboat, it's Brandon's stellar craft and control that sets him apart from other percussionists. He can play with the subtlety of a kiss or the power of an electrical storm, often within seconds of each other.

He's probably best known for his work with Picastro (Owen Pallett is a former member.) They are going on a European tour this month to support their latest disc, 'Whore Luck'.