It was a big night. The hot ticket. George Stroumboulopoulos was there. Kevin Drew was there. It was a packed house. It was Brooklyn "it" band MGMT headlining at the Mod Club. Everyone wanted it to be their favourite concert of the spring. But did it deliver? 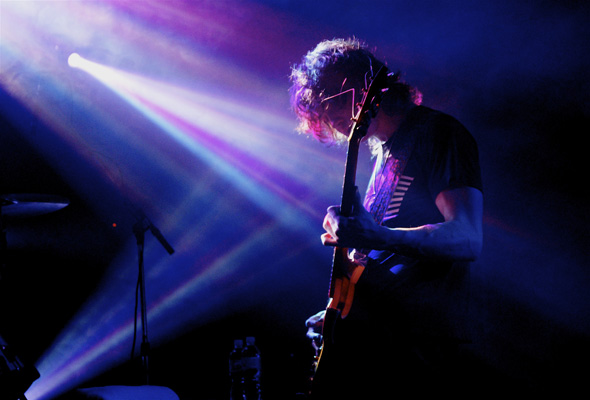 I really love three songs on MGMT's keyboard-heavy debut Oracular Spectacular (produced by Flaming Lips collaborator David Fridmann). I think I will always listen to and enjoy "Time To Pretend", "Electric Feel" and "Kids". Based on these three songs alone you could safely predict the longevity of this young band. I had heard that their live show wasn't great though.

Fellow Brooklynites Chairlift opened the show. The psychedelic three-piece played a mellow set of mostly unreleased material (they only had a 7" for sale and were giving away demo CDs), so the crowd wasn't really into them. Their soon-to-be single "Evident Utensil" caught my interest on their Myspace page before the show and it translated well live. The highlight of their set was definitely drummer/keyboardist/bass player Patrick W.

The Mod Club was at capacity by the time MGMT took the stage. Right from the first song in their 12-song set though, the crowd did not seem completely won over by the band (except for the very excited young girls in the picture above). Since my expectations weren't high, I was impressed that songs I didn't like on the record sounded better live.

The biggest cheers came when the band played my three favourites. "Time To Pretend" was a little underwhelming I have to admit - that song deserves to be performed as it sounds on the record but with their 2 guitar/bass/keyboards/drums set-up, MGMT's live show doesn't allow for that.

My biggest pet peeve about their show was the encore. They ended with "Kids", which like "Time To Pretend" has a very un-live band sound, but instead of forcing it into their guitar-driven mould, MGMT main men Andrew VanWyngarden and Ben Goldwasser committed the opposite crime by sending the backing band off stage and singing the song to a backing track. I was really disappointed. Their guitar player got back on stage for a solo, and the rest (including members of Chairlift) returned with shakers to end the night on a high note. I wasn't buying it though - they were all still dancing around to a pre-recording of the whole song.

So, the highlight of my night was "Electric Feel". That was a solid performance. Am I bigger fan of MGMT now? No. But for their three songs alone I will anticipate new material. Those songs are really that great.