Describing Charlie Hunter's music to the uninitiated used to be like pulling teeth. People used to look at me like I was from Neptune when I tried to tell them about his 8-string bass/guitar hybrid that he uses to play bass, melody and chords all at the same time. Fortunately, technology has caught up in the meantime, and I can just point people to YouTube so they can see for themselves what he's all about.

Recently, I was fortunate enough to have a chat with the jazz sensation about his unique approach to making music. Unlike the vast majority of his contemporaries, Charlie Hunter learned to play the old fashioned way. While most jazz musicians today study jazz at college and university before really getting in front of a live audience, Charlie ended up learning "on-the-gig," figuring it out as he went along. "I certainly don't have that institutional thing," he confesses, "which I used to think was a big problem for me. As I get older I realize that that's less and less the kind of approach I'm interested in, as far as music goes anyway. So, it's kind of served me well. The knowledge is out there. I've just been playing gigs since I was sixteen, and you just play lots and lots of music with lots and lots of really great people and that's your education, you know. You just fill in the blanks with other stuff."

Shortly after having his first 7-string guitar custom built for him, Charlie put his experience to the test and struck out for the streets of Paris and Zurich where he made a living for himself as a street musician. He told me that experience really forced him get his stuff together, simply because "If you don't play then no one stops and listens and no one gives you money and then you don't have a place to sleep that night. You definitely feel more secure about what you do when you've gone through some experience like that." 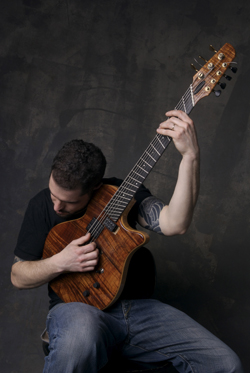 Since 1993, when Primus' Les Claypool convinced Charlie to record an album for his Prawn Song label, Charlie has put out 14 albums under his own name, not to mention a bevy of side projects, compilations and collaborations. He's a musician constantly on the lookout for something new to do. Definitely not the kind of guy to get too settled into one groove, he tells me "not only is it fun playing music, but it's also an educational experience for me as well. Every night I play is an educational experience." I ask if he's searching for something in particular, but it seems like has just naturally attracted to discovering something new about his own playing. It's just something he has to do. "Otherwise," he adds jokingly, "if I don't do that I'd fall asleep, and that'd be awful."

I ask if there's anything new and unexpected coming on the horizon, and Charlie tells me "I'm doing a thing with a tap dancer named Tamango and two Haitian percussionists that's pretty fun. It's more his thing than it is mine but it's still all improvised. We played on the streets together like twenty years ago and now he's kind of like a big wheel in the dance world."

I'm floored - I totally didn't see that coming, and in a nutshell, I think that's what makes him such an interesting musician: he's always up for trying out something new, and he's always got at least one surprise up his sleeve.

Charlie Hunter will be playing at Revival (783 College St.) with Erik Deutsch (keyboards) ande Tony Mason (drums) on Wednesday night (February 20). Please note the venue change (the Mod Club will be playing host to Super Furry Animals that night). Warming up the show will be Toronto's Chameleon Project and DJ ?uesquecest.