The Early Birds Catch Worms at The Mod Club

Birds of Wales tried hard to energize The Mod Club Theatre early on Saturday night, but the 6:30pm start made it tough for both the crowd and the band. What a shame! Considering the daylight saving time extra hour we got that night, they could've easily pushed back the start of the concert and not disrupt their regular dance club night.

Birds' local following isn't quite enough on its own yet to fill a big, beautiful space like The Mod Club Theatre. At least not this side of the Atlantic. The band garnered sufficient interest in Europe to tour there three times in the last year or so, buoyed by the gentle yet catchy single Cinderella (Has Nothing on You).

Lead singer Morgan Ross tried to cajole the sparse crowd to be more vocal, but they were probably not sufficiently liquored up yet that early. Maybe it was because it was an all-ages show and half the crowd wasn't imbibing any. By the time Birds took flight at the end of their set with the rockabilly A Few More Days, the audience had only just warmed up enough to give Manchester Orchestra a decent reception.

Manchester Orchestra is neither from Manchester nor an orchestra. The Atlanta, Georgia-based young band's vocalist had both the intonation and facial expressions of Adam Duritz from Counting Crows. Altough their music wasn't as immediately catchy. It's kinda an honest vibe that grows on you the more you listen to them. They were much more fun to watch though. Especially the keyboardist, whose facial and bodily contortions left me wondering if he was mentally challenged or just liked to give'r.

More review and mini photo slideshow after the jump. 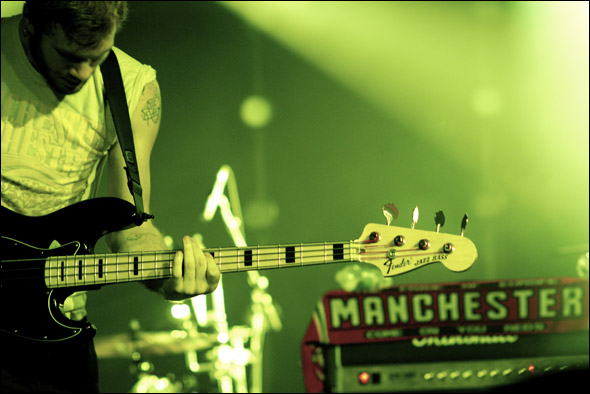 When Manchester Orchestra's tourmates, and Annuals hit the stage, it was only 8:45pm and the crowd was still relatively immobile. Granted, it's not the kind of music to illicit skanking or moshing, but still....

One guy in the audience was obviously having a better time then the rest of us and his recreational enhancement was smelled by the Annuals' singer on stage who invited him to party with them after the show. By the looks of it, we all could've used a bit more parting early in the night.

You can catch Birds of Wales next Monday, November 12 at Supermarket (268 Augusta Ave.) in Kensington.