The Red Bull Music Academy (RBMA) finished its Toronto semester last week. Held annually in different cities worldwide, the festival-style series of workshops, lectures, recording sessions, tutorials and gigs brings together the DJs, producers and musicians from dozens of countries. From a pool of some 2,250 applicants, Toronto's Class of '07 comprised 60 artists over a pair of two-week terms, plus in-house technical advisors (flown in as well as locally picked), visual artists and Red Bull Canada organizers, including Lubor Keliar, who navigates the studios and lounges smoothly: "It's kind of like a camp," he chuckles. Participants take in hours of daily lectures from guests and faculty insiders, alongside club showcases, gallery events and recording sessions (and not quite enough of the latter, notes up-and-comer Japanese minimal tech producer Akiko Kiyama). Among the final lecturers of the Toronto 2007 academy (it's Canada's first time hosting) was Tony Allen, Fela Kuti's drummer and pioneer of the singular Afrobeat shuffle on the drum kit, which he demonstrated following a longer interview-style lecture (Youtubed after the jump).

Moderated by South African-raised, Toronto-based hip-hop producer Shaheen Ariefdien whose thoughtful questions guided the corduroy-and-leather-clad Allen, the two-hour talk consisted of colourful stories interspersed with tracks from Allen's catalogue, from the early days with Fela's Koola Lobitos -- the highlife-jazz fusion that would become Afrobeat as the legendary Afrika 70 -- to Allen's later creation of his own fusion genre, Afrofunk (borrowing from electronica, R&B, rap and dub), which he's explored in collaborations including Blur's Damon Albarn and U.K. producer Simon Tong.

The room even kept silent when a cellphone rang, pausing the lecture with accusing eyes racing around the fouch-and-pillow laden room until Ariefdien asked "can someone kill that?" Allen reached into his pockets and replied "nobody can kill it except me." A relieved laugh segued back into the talk.

Allen's storytelling, too, relaxes and rivets a room with great ease. The room of musicians, music journos, the documentation team -- participants from Germany, New Zealand, Brazil, the U.K. and Singapore -- everyone sat still and listened to the man in brown: 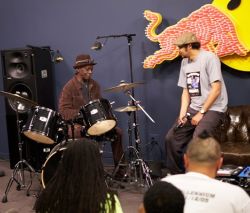 On his musical origins:

"I tried guitar and horn ... but I would always watch the drummers. My first teachers loved highlife and rumba ... and [although his father warned him about leaving the certain for the uncertain] ... I left [his job as a radio technician at age 18 to become a drummer in jazz projects around Nigeria]. Through Blue Note records, I noticed a new style of jazz drumming. It sounded like more than one drummer. Everyone at the time [and often today] drummed with the hi-hat always closed. Downbeat had two pages of just hi-hat rhythms -- the same music playing, but all of a sudden, the hi-hats were different.I was in bands that would play 12-bar blues only.

... Fela tried three different drummers. He wanted me to play 4/4 solos, to play highlife too but not in the same way. [When (Fela Kuti) saw Allen play his distinct hybrid of jazz and highlife, hi-hat open-close-style and all, he was pleasantly surprised, and Allen soon left his jazz bands to join Koola Lobitos, later the Afrika 70 band upon the group's return to war-torn Nigeria after a 1969 trip to the U.S., including L.A. recording sessions.]

There were two things: the militancy and the music together. Every [Lagos, e.g.] band wanted to play James Brown ... and they did correctly, but it took time for Afrobeat to be recognized in the country ... *then* other bands wanted to play it.

On Afrobeat and the arrangements on his solo albums and on Fela & Afrika 70 records:

"Drumming defines Afrobeat -- it's the most important [thing]. [Fela would write] notations for everybody, and started to write them for me. I said 'you think I'm gonna play it like this? I'm gonna play it the way I feel it.'

[The exchange quickly became one more like:]
Kuti: 'What do you want to play?'
Allen: 'Let me [sit down at the drum kit and] check it out.'

On Fela as a bandleader, and leaving the fold (after some 30 albums recorded in one take off the floor -- "no mistakes"):

"If you want to work with Fela, you have to take him as he is. ... The last straw was the Berlin Jazz Festival. When you count how many people were working, making money in the organization -- management, singers, dancers -- 28 on stage, 71 in total -- if the magic would bring us together in the studio, then OK -- but i n a live [tour] setting, it's too much." [After backing most of the saxophonist-frontman's best-loved recordings, Allen quit in 1979.]

On politics and musical consciousness:
"We don't want to fight your wars [Allen credited this statement to the Afrika 70 days]. We don't know who's going to stop it. [But] music is indelible (unlike newspapers). When it's done, it's done. This stays."

On the future:
"I want to make good music until my last breath."

Allen finished off by "blessing the kit and our ears", as Ariefdien put it, with a demonstrative overview the Afrobeat sound he created:

And the energy drink company's plush digs on Queen West? With last weekend's listening session and closing parties, the 2007 terms have ended -- gone the recording studios, radio station, lecture hall, Mac-furnished lounges and several of the art installations -- Keliar says, at least the Queen and Peter loft isn't going anywhere. The company plans to overhaul the space, add more offices but keep the second-floor public art gallery as a launch pad for future events, like shorter RBMA weekend sessions or one-off parties, with rotating art installations open to the masses. The pervasive company logo may be bound to stay, but, says Keliar, so is the company's commitment to street-level music and culture in Toronto.

"Some companies pay to have their name all over a golf tournament," says Keliar when asked about the swish RBMA surroundings. "This is the kind of thing we want to promote -- it's a better fit."

Images courtesy of May Truong/Red Bull