Day 2 of the Virgin Festival was a stark contrast to Saturday's sunny sweaty shindig. The clouds and winds were hanging around, making things quite cold. Luckily, the grounds were not too wet and I could sit on mostly anything with only a bit of moisture creeping into my pants. I started the day at the 3rd-tier Budweiser stage to catch some local acts, and then hopped over to the main stage for Canadian indie superstars Stars and Metric. 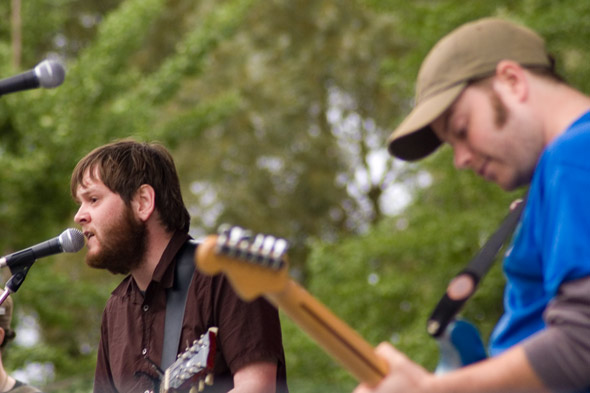 Postage Stamps (1:40)
I've heard a lot about the Postage Stamps from my friends, but until today I haven't had the pleasure of seeing them play live. The 5-piece band (drums, 2x guitar, bass, and keys) are stalwarts of the Toronto indie scene, having played in and around Toronto for over half a decade (so the media notes tell me). My first impression of their act was that they are talented musicians with an ear for complex melody arrangements. They're skilled at layering their instruments for an atmospheric effect, so despite the coarse leveling at the Budweiser stage (the smallest of the 3) this was still apparent. Their vocal work, however, was lacking in range and frequently locked into the same minor-key paradigm. That's ok though: I can handle flat vocals if the music is good, and their music was great. My favourite part of their live act was the extended musical interludes that showed an air of playfulness that only comes with confidence in their own work. 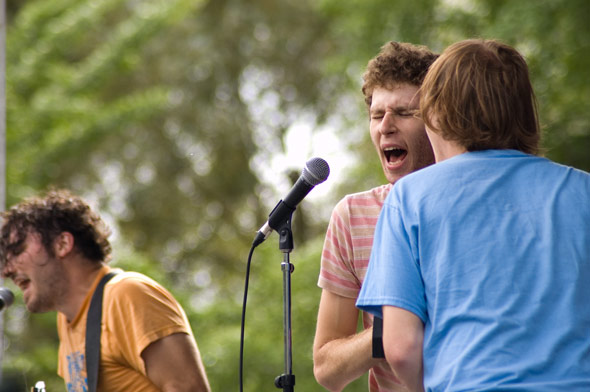 DD/MM/YYY (2:30)
DD/MM/YYYY (Day Month Year) was an enigma to me. Their music is nowise restricted to a specific key, tempo, time signature, melody, chord progression, or any conventional measure of musical structure. The music shifts constantly, like a chameleon changing colours at its own whimsy. In a sense they are an experimental outfit that answers to no genre... dangerously on the edge between cutting-edge music and complete audio masturbation. They feature a heavily-rotating cast of 5 musicians that jump between 2 keyboards, 2 drum kits, 2 guitars, and numerous effects pedals. When I was trying to pen them into a single phrase or concept, the only thing I could think of was 'noise shockers'. The crowd seemed to enjoy the music, though I wonder if anyone there really knew what they were listening to because I sure didn't. Really, what I think it comes down to with DD/MM/YYYY is that there's nothing to understand--the band's music seems more of a philosophy. 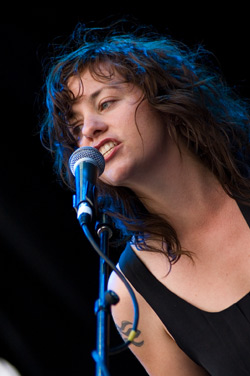 Stars (5:00)
I was excited to catch Stars for the first time since discovering their albums last year. With 4 albums under their belt now, they've created a fine little niche in the Canadian indie soundscape much like the New Pornographers have done. They opened with the current single ("Take me to the Riot") off their new album ("In Our Bedroom After the War"). It was a faithful take on the studio track, though there were some problems with Amy Milan's vocal levels. Her lyrics were difficult to discern unless lead-singer Torquil Campbell was also doubling the vocals in his separate register. I was willing to look past that deficiency, because Stars play poignant pop that has a way of making you smile regardless of the lyrics.

Next, they moved onto "Set Yourself on Fire", the title track of their last album. Continuing the trend, Stars went even farther back with "Elevator Love Letter", a track off 2003's "Heart". Both tracks were great crowd-pleasers, as any responsible band with an acclaimed back-catalogue will play between new material. Back to the new album, they played a fun rendition of "The Ghost of Genova Heights", which features Campbell doing his best Prince impression. It's a strange departure from their usual sound, but his falsetto work is simply fantastic against a funky bass track.

Later, Campbell explained that a particular song was for all those people from Scarborough (though few people were willing to cheer for my hometown), because he 'nearly died 25 times there.' The song was "Reunion", one of their great love/heartbreak narrative songs that can pluck the strings of anyone who's warm-blooded and breathing (not sure what it has to do with Scarborough). Stars followed with "Window Bird", a new track with playfully lilting birdsong-like vocals from Amy Milan. To close, they played two of the finest heart-striking tracks from Set Yourself on Fire: "Ageless Beauty" and "Your Ex-Lover is Dead". It was a solid set with 9 songs, heavily dominated with the best tracks from their last album and a few of their interesting new ones. 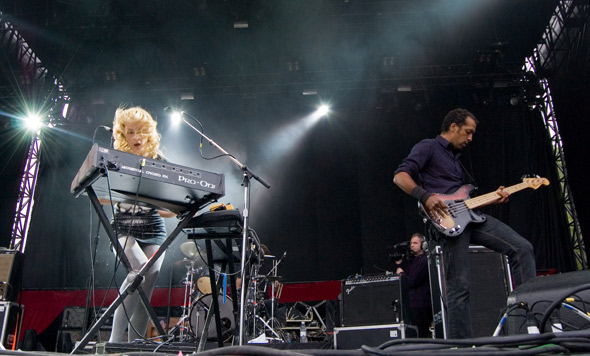 Metric (6:00)
First and most important: Metric played a number of new tracks from their upcoming album. Of the new material they played, the sound was decidedly more melodic, synth-driven, a touch slower than expected, and more fleshed out. They're not continuing the trend that occurred between the ever-popular "Old World Underground, Where Are You Now?" and the follow-up album that fractured many Metric fans into Love/Hate camps: "Live It Out". My guess, based on the little that I heard, is that the new album will have broader appeal to everyone (but don't expect a return to Old World).

Between the new songs, the band powered through a brief selection their greatest hits: "Poster of a Girl", an unusually short but always sweet "Dead Disco", and "Monster Hospital". They also delved into their lost album ("Grow Up and Blow Away", recently re-released) with a long version of "Rock Me Now" that included some audience participation/singing for the falsetto vocals. While the new material was nice to hear, their back-catalogue is getting a bit tired from overplay--they definitely need a new album/tour soon to spice up their selection at concerts.

---
All photos by Ryan Couldrey. Thanks Ryan!