June 29 update
A follow up article has been posted on blogTO. View it here.

June 26 update
I'm freezing the comments section of this entry as it's become a garbled mess haterade for all parties involved. Thanks for checking this entry out; the original content and updates are all being left in tact, as well as all comments posted up until this update. Expect more news later this week on the matter. -Ryan C

June 25 update
According to a new source, a Pride volunteer Jeffree Star freely admitted to punching a woman who didn't throw anything at him.

Star is reported to have said something along the lines of (I'm paraphrasing here) "She was with the two guys who were throwing the shit. I saw her [give him the finger] all night so when I got into the crowd I punched her in the face. I know she didn't throw anything, but she pissed me off".

This could easily be why Star got pimp smacked with the ban stick instead of praised for defending his and Pride's integrity. I'm believing this new source more than I trust Star, personally, and there's a reason or two for it, as well as the original article (from which I'd like to fully retract most of my positive statements) after the jump.

--
The original article is below. It seems that Star may have lied to us in the beginning, and let the truth slip later. Either one person or the other is lying, and something tells me Star has more to lose by admitting to punching a woman who didn't throw anything at him than a Pride Volunteer who'd never even heard of him before his set. Believe whichever story you will.

Also, I'd love to thank Perez Hilton for not only sending us some immediate link love, but also not even allowing comments on his own entry, ensuring that blogTO got lots of traffic for breaking the original story. I'd like to say that's how it should be done; thanks Perez. I'd like to NOT thank Jeffree Star, who subsequently copy and pasted the article, didn't link us, and even sourced the photos from our own server; in other words, our server usage went through the roof, and we didn't even get the visitors to show for it.

There are a number of unwritten rules and regulations that all concert and show attendees have to follow in order for everyone to have a good time. A few of them are as follows, but the list is by no means complete.

1) Don't get so drunk that you fall backwards into me and nearly spill both of your beers on my camera.

2) Don't get grabby with people who aren't in the mood to reciprocate.

3) Even if you're feeling like a Debbie Downer, don't get annoyed with people who're having a good time and aren't actually annoying.

4) Possibly most importantly, do not throw shit at the performers, lest you incur their wrath and they punch you in the face.

Number 4 is exactly what happened to Jeffree Star last night at the Pride South Stage...

I'd noticed a few things like water bottles and red bull cans flying onto the stage from the crowd. At first I thought it might've been someone's underwear or something, because seriously, who the hell throws full water bottles at a performer?

Assholes do. Silly me, should've known.

Jeffree Star has many, many fans. but, like the Howard Sterns of the world he also has a great many detractors. Whether it be because he dresses differently, sings songs about fucking straight guys, or because he's just really popular, some people will just search for excuses to hate him and other people like him.

Why this would be an issue at one of the premiere GLBT Pride festivals in North America, I don't know. It's the last place something like what happened to Star should ever happen. Pride is about a great many things to a great many people. For me, it's about everyone, no matter how they're dressed, how they act, or what "equipment" they have being everyone else's equal, and then celebrating that absolute fact.

If you throw shit at a performer at Pride, you deserve to have either your nuts or ovaries torn out and set on fire. The next best thing is to have your face punched in, which is exactly what Jeffree Star did when he finished his set. As it was ending, yet another piece of crap got chucked at him. One of his dancers pointed out who it was and Star flew like fucking Superman over the crowd railing and punched the chick who did it in the face.

Yup, Jeffree Star punched a woman. If I was in his position, I'd have done the same thing. There's absolutely no excuse for what she was doing, and what she got wasn't even enough of a payback. MuchMusic videographer 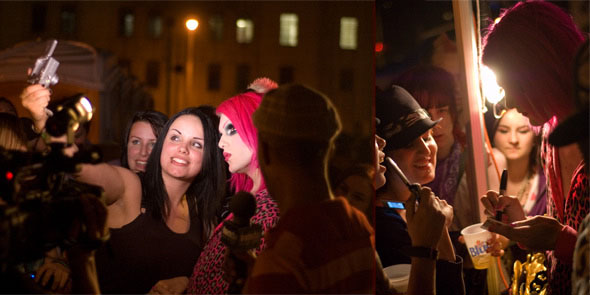 Barb Milner told me it was "the most 'punk' thing [she'd] seen in years."

And even after all that, Jeffree Star stuck around to sign autographs for his fans, where a lot of other performers would've stormed off in a huff and told their managers to go fuck Toronto. Like him, hate him, or just be indifferent about him, he's a class act all around. He'll be performing again at the Alexander Parkette "Alterna-Queer" Stage at 6:00 pm (???) tonight, June 24.

Photography by Ryan Couldrey. More shots can be seen over here.

ADDITION: I missed the actual punch, yes. This is as close as I could get. Star moves fast!

UPDATE!: This just in, Jeffree Star has been banned by Toronto Pride officials because of last night's clash. He will not be performing tonight at Alexandra Parkette.