As we shuffled into the Steam Whistle Brewery for this year's NXNE press conference, two things became immediately apparent:

1) The NXNE crowd is a lot younger than the CMW crowd, as evidenced by the mere fact that plan B Emergency Contraception was one of the sponsors... oh, you frisky kids.

2) Since we were inside a brewery, running out of beer was not an option.

We enjoyed some fancy appetizers like asparagus and pea soup in a shot glass (it doesn't go down as smoothly as tequila) for an hour. While we were waiting, Ryan L ensured that the bottles kept coming by scoring extra drink tickets.

This news was well received, but the big ticket we were all waiting for was really the appearance of Dave Foley... 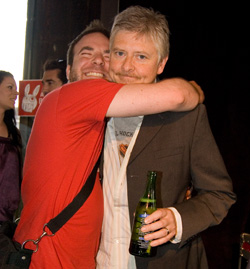 Unfortunately, Dave's delivery was a bit lacklustre last night. Part of the problem was that he had to read 20+ pages off the press kit, so he spent most of the talk looking down at the sheets of paper on the podium. Regardless, he slipped in a few worthwhile cracks between the dry press fluff, including how he will likely be drunk at most NXNE events and hit on your girlfriend... or how great it is to party on other people's dime (beer-whores!).

Here's the quick and dirty summary of what he said:

NXNE kicks off on June 6 (5-7 PM) with a free concert at Nathan Phillips Square. Featuring Dr. Draw and Shad K, hosted by Muchmusic's Devon Soltendieck. Mayor Miller is slated to make an appearance too.

This is only a preliminary listing, and doesn't include many of the tentatively confirmed Toronto/GTA bands that we received (without venue or ticket info). Still, there is enough here to get excited about while we wait another month for NXNE to arrive.

Since the press kit was available online, we couldn't leave empty handed (though our bellies were full with that glorious pilsner). Ryan L, perhaps a bit soused from the handful of drink tickets he talked his way into, got the photo-op of the night by grabbing hold of Dave Foley in a bear hug... now eternally enshrined for public record in the picture above.