Explosions In The Sky

In response to obviously appreciative screams and applause (typically telling of an encore) that endured long after Explosions In The Sky left the stage late Saturday night, guitarist Munaf Rayani came back out to humbly and graciously thank the crowd for coming out. He then quickly apologized, "Sorry guys, but I think that's all the juice we've got in the tank tonight..." 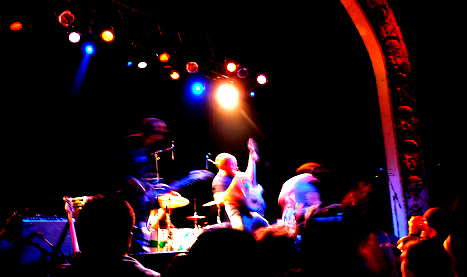 This past weekend, the Texas-based foursome played back to back Saturday and Sunday night shows at The Opera House. This was my first Explosions In The Sky show, and I couldn't help but be amazed by the energy these four talented individuals exhibit on a given night. Diving in and out of ambient and melodic offerings like So Long, Lonesome to more epic and explosive pieces like The Only Moment We Were Alone, this band definitely proved their versatility and stamina throughout what seemed like one single uninterrupted and, most of all, evolving piece of music.

As disappointing as it was to come to grips with having to leave that night without an encore, after the show they put on, I couldn't even imagine having the energy to walk off the stage let alone play another song. It was a weird feeling to be honest. I felt slightly uneasy at the end of it. Encores have become so typical and rehearsed to the point where bands literally DO plan and rehearse them. I won't get into a whole thing about it all (because I'll end up sounding like a bitter old man) but there was a time when an encore was truly a spontaneous thing... something that occurred only because a crowd BEGGED for more and because a band wholeheartedly appreciated such begging. Perhaps it helps to not simply be fed such treats regularly. Maybe it's better not knowing.

Aside from the eclectic headlining performance, it should also be mentioned that there were two opening acts that exhibited just as much energy and enthusiasm. Playing right before Explosions was The Paper Chase, who aren't really my cup of tea, but put on an energetic performance nonetheless. Before them, Eluvium kicked off the show with a beautiful set of ambient and moving songs, performed along side projected video montages of locusts and seagulls shown only as silhouettes flying across a white backdrop. Definitely a highlight. The whole night was simply an attack on the senses. With that said, who can really complain, right?