Far before CMW weekend kicked into gear, the buzz around The Pipettes visit to Toronto was considerable, but I don't think anyone realized just how considerable until they tried to get into the show Saturday night. The Rivoli had oversold their tiny back room, which meant that wristband holders, media passes, and even reps from the band's own label were shit out of luck. The only golden ticket was an advance ticket. By 12:30 the ticketholder's line stretched down the block, where I met fans who had traveled from all over Canada, and from as far as Ohio and New York.

After a lengthy and totally fubared door delay, the girls from Brighton, UK finally hit the stage at around 1:15am in all their polka dot glory.

Supported by their mysterious backing boys The Cassettes, The Pipettes (who are Rose Dougall, Gwenno Saunders, and Becki Stephens) brought the Rivoli back to the "innocent" 1960's Phil Spector era of sugar-pop girl groups - before The Beatles "changed music for the worse" (as Rose has been known to say). Their act is both serious and tongue-in-cheek: their sugary-sweet indie pop is strategically over the top, but underneath their seemingly simple tales of boy troubles, they're firmly rooted in riot grrrl punk & feminist ideals and have serious lungs to match. Their hollering is as pretty as their harmonies, and their calculated charm is undeniable. They have the upper hand, and they clearly know it. 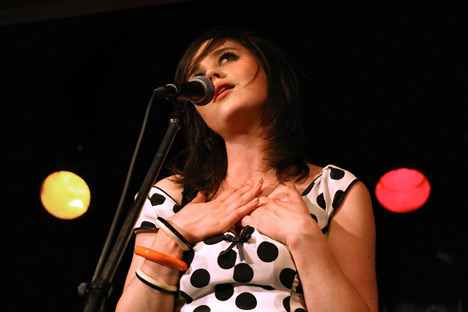 Most CMW showcase sets have clocked in at no more than 45 minutes per band, but the Pipettes crooned & swooned their way through a respectable 1+hour set of pretty much their entire (small) song catalog, from their debut album "We Are The Pipettes". (SETLIST). Now we all know Toronto audiences don't dance, but they didn't - so did plenty of coaxing and cajoling. And it worked: at one point I turned around to see a large portion of the audience actually twisting, clapping, and Pulling Shapes. Brav-O. 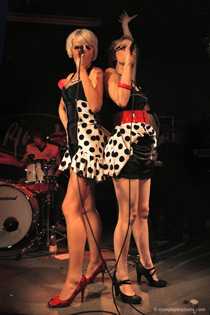 There were definitely moments when the choreographed dancing got a little too cheeky and the theatrics tread slightly into Spice Girl Barbie territory, but those inklings were quickly dashed by their impossibly cute winks, nods and infectuous grins.

The band was genuinely surprised at the packed house and warm reception - somehow they had apparently missed out on their own pre-show media buzz. I saw many an out-of-town act get a pretty harsh audience shun this weekend, but this was thankfully not one of those occasions. I believe Toronto has ensured that the Pipettes will be back, and we'll be waiting. Their kisses were not wasted on us.

(Photos by Beth Hamill, additional photos from the show HERE.)