Now, I dig Cadence Weapon and I understand the bwoy put on a good show or two at this year's CMW. But when you've got rapping puppets from Germany, cookie jars that rhyme and Ernie Whitt references from an MC that hands out his own stickers, you've got a hip-hop show unlike any other. Public Enemy who?

Josh Martinez's stream of one-liners began before he took the stage. While I washed my hands, I heard another guy say he'd never seen the performer in the washroom right before the show, to which Martinez replied "this is a new kind of show ... some forward-looking shit." The Vancouver-based, Halifax-bred MC -- what is it about that town and wacky, witty rappers? -- did not disappoint, starting with our "national anthem", a falsetto "Eye of The Tiger" rendition.

That gave way to two of the best one-man-plus-DJ sets I've ever seen, starting with Martinez and followed by Wordburglar, another Haligonian MC now based in Toronto. Martinez, renowned for his winning stage presence and offbeat rhymes, did several things to reel in the audience, starting with a cookie jar shaped like a b-boy, the head of which played a recorded rap when it opened to reveal the oatmeal n' sprinkles goodies inside. Tongue-in-cheek rhymes pairing "Junos" (which he hasn't received) with "Jew nose" (to which he pointed) kept the crowd amused. Martinez continued on with dance moves aplenty, sharing Bel Biv Devoe foot-twists and that NKOTB chestnut, the folded leg-drop n' bounce. Even when he just grabbed the mic stand and danced around with it, dude was fun to watch. And for the finale, Miracle Worker, he grabbed a tennis racquet on a strap, lit two sparklers and went out in style, smashing the racquet in grand rockstar fashion. 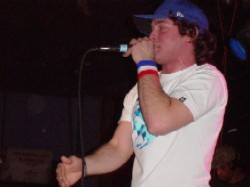 Wordburglar's set came next, bringing among his rhymes the killer that earned him the CBC Radio 3 Bucky Award for Best Lyric: "You said your girl looked like Drew Barrymore/I met her. She looks like Drew Carey more" (from "Word Owner"). With your man and mine More or Les backing on DJ duties and stepping up to the mic for a back-and-forth exchange on spittin' fresh (new rhymes each day), Wordburglar held his own as the meat in the funny-rap sandwich of performances. (Memorable line from that exchange: "Like a PDF -- you can't fuck with the text.") You can't go wrong with allusions to 1980s Blue Jays catcher Ernie Whitt, "the Oracle lady" from The Matrix and the Cream of Wheat breakfasts the MC's Ma fed him before "bundling you off to get on the bus and go hang out at some other guy's house -- I know you know what I'm talking about." SJ did a fine job of infecting the crowd with Burglaritis. But the weirdest was yet to come. 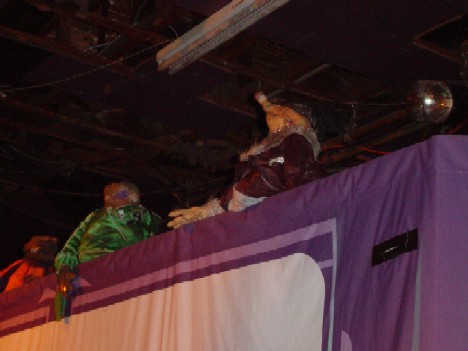 In a show of animal puppetry-as-counterculture genius on par with Meet The Feebles and funnier to boot, Berlin's Puppetmastaz brought still more laughter into the room. Their shtick consists of several rapping puppets performing atop a large screen, behind which much magic (and octopus-like puppet-and-mic-wielding) took place. Each animal character sports a different sub-staple of hip-hop streetwear: Mr. Maloke (a rat, I think), rocks the fur-lined leather coat; Snuggles the bunny works it in an orange tracksuit; and Wizard (frog? gecko?) keeps it real in a green silky piece reminiscent of a kimono. Each of these three characters also duelled verbally with their own doppelgangers, similar-looking puppets, clones with lighter "skin" (they've "been to the solarium" more, the explanation went), who appeared and stirred shit up. Further stage antics -- beside the fact that they did some pretty decent rapping with strong horns and bass in the backing mix -- included a Jedi Master Yoda slicing up a lizard character, lightsaber and all, a Miss Piggy-esque cameo by a "female" puppet on shrill British-chick vocals, and a finale that saw a rhino in gold chains pissing (water) on the audience. The humans behind the curtain, who amused when they stepped out for a knees-in-the-air steppin' parody of hip-hop shows, were wise to keep things behind the curtain for the most part -- the puppets' costumes induced more chuckles. Still, big cheers all around. Independent hip-hop proved its sense of humour through the artists at these Toronto shows. Rap need not get jealous, but the odd subculture puppeteer might.

Images of Josh Martinez, Wordburglar and Puppetmastaz live at The Reverb for CMW 2007 by Thomas Quinlan