Rob and Doug Ford were joined on their weekly Newstalk 1010 radio show this week by Ontario Lottery and Gaming CEO Rod Phillips, who told listeners any GTA gambling facility would be less than 10% gaming and consist of convention, retail, residential and hotel space. Ford also said he'd like to cut the city's land transfer tax by 10%. The show also featured Markham mayor Frank Scarpitti for a chat about stadia.

The City of Vaughan (not Markham...) has apologized for a profane tweet during the Friday's snow storm. The city's official account publicly questioned local "fucknuts" who keep their cars on the street during a snow storm. The question lingered for roughly an hour before the account was temporarily suspended.

Metrolinx is finding support for taxes to pay for new transit if the most recent round of public consultations are anything to go by. According to the Globe and Mail (paywall), a small increase in sales tax is one of the preferred ways of raising the $34 billion required to prevent the GTHA slipping into gridlock. Are small raises on existing tolls the best way of easing the pain?

Police are asking drivers to take extra care this morning after last night's freezing rainfall. A GO bus has already spun out on the greasy Highway 404 road surface and some school busses have been cancelled (list).

The vagaries of Toronto's winter weather make skating on Lake Ontario a little hit or miss. For safety reasons, the city doesn't allow skaters onto the ice between the downtown and the Islands, but it's still possible to have a sneaky game of shinny with a view when its cold enough. Have you skated on the lake?

Councillor Mike Del Grande had his hands full this weekend after snow plows in his Scarborough-Agincourt neighbourhood failed to clear driveway access holes like they're supposed to. No problem, though, Del Grande brought out his personal snowblower and did the work himself. Windrow clearing, as its known, was salvaged in 2011 budget which Del Grande assembled. 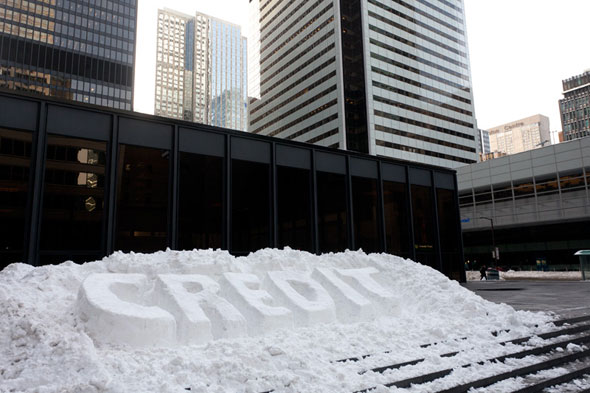 Sean Martindale and Adam Krawesky didn't let a pile of fresh snow outside TD Centre go to waste this weekend. The pair carved "CREDIT" with shovels in anticipation of today's warm temperatures and rain that will, hopefully, provide an "opportunity to catch a snow CREDIT meltdown." Nice.IN BRIEF: