This is a big weekend for sports fans. The 100th Grey Cup match between the Calgary Stampeders and the Toronto Argonauts kicks off at 6 p.m. tonight at the Rogers Centre. The Albertans have a history of bringing a party to Toronto: in 1948, 250 fans roared into town on a specially chartered train, and this year there was a repeat journey, captured above.

Below, there's the story of the famous Grey Cup weekend in Toronto that cemented a tradition of mascot horses for the Calgarians. There's also a look at the new Air-Rail Link (now the Union-Pearson Express) trains coming to the city in the next three years, now that a push for electric vehicles seems over and done with. Also, find out what Toronto could have looked like if a major push for downtown highways had succeeded. 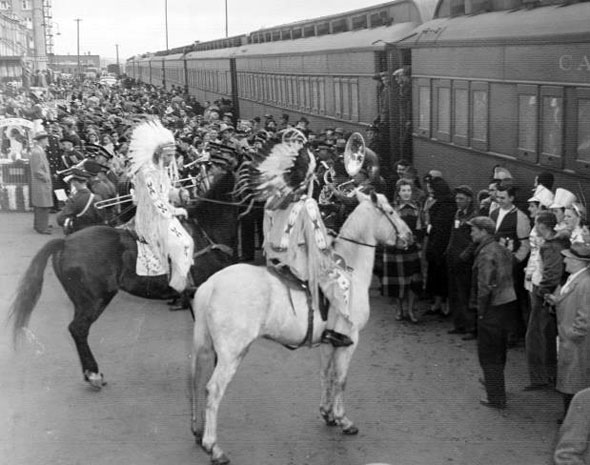 As you've already likely heard, the Calgary Stampeders and their posse of horses are in town this week for today's Grey Cup match. There was a minor controversy on Thursday when staff at the Royal York decided not to let Marty, a 15-year-old dark brown stallion, walk through the hotel doors as per a 64-year tradition.

Management had a change of heart following cheers of "let him in" from Stamps fans on the street, and a concerted outcry on social media. But what of this tradition - where did that come from?

According to the Toronto Star on November 26, 1948, the day before the 36th Grey Cup match at Varsity Stadium between the Stampeders and the Ottawa Rough Riders, "the shrill yell of the cowpunchers echoed through the quiet [Union] station almost the instant the special train pulled in. Red shirts, yellow shirts, pink shirts, green shirts, high-heeled boots, spurs, lovely western lassies were all there in colourful confusion."

The Stampeder Special, a 14-car train from Calgary packed to the gills with 250 fans, had arrived. An impromptu square dance broke out in the station cafeteria complete with violin, guitar, and accordion players. Watching on, Toronto mayor Hiram McCallum remarked "I'm glad I'm not here officially; it's much more fun just to stand and watch. Toronto has never seen anything like this."

Later that day, a crowd of horses and chuckwagons brought on the train gathered outside Old City Hall for a public flapjack and bacon lunch.

Calgary would go on to triumph 12-7 over Ottawa, cheered on by a rabid crowd. During the celebrations, a horse rode through the lobby of the Royal York - it's not clear whether the rider had permission - launching a tradition of lobby-walking for the Calgary contingent that continues to this day, even if some of the swankier locations think twice. 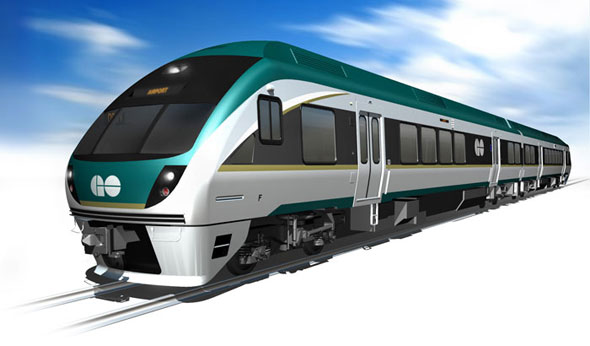 This week, the Clean Train Coalition - a group fighting for electric trains on the under-construction Union Station-Pearson rail link, now being rebranded the "Union-Pearson Express" - failed in its attempt to have Metrolinx's diesel trains replaced with something more environmentally friendly.

That means the train pictured above, and presently on order from Japan's Nippon Sharyo, will likely be chugging along the line in time for the 2015 Pan-Am Games. The vehicles themselves will be extremely similar to ones being built for a similar project in the Sonoma-Marin area of California.

Here are some stats on those vehicles:

Features under consideration for the ARL:

While looking for something else entirely at the archives, I came across an old copy of the Master Plan for the City of Toronto and Environs. Dated December 31st, 1943, the document is a stark illustration of what the city's leaders envisioned as the future of transit: namely, highways. Lots and lots of highways. 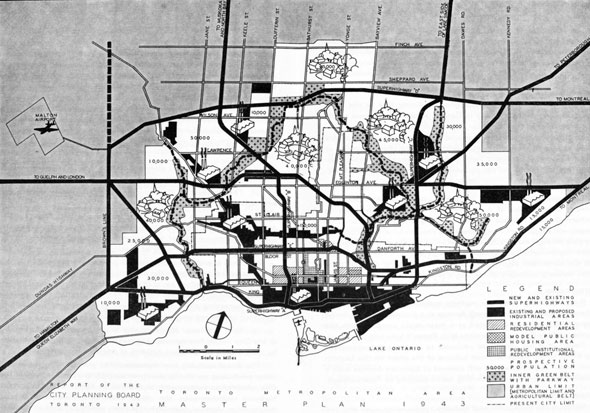 Though the Gardiner Expressway, then "Superhighway 'A'," the Don Valley Parkway, and 401 were eventually built, many of the roads that would have penetrated downtown were nixed and replaced with rapid transit lines. One road dubbed "Superhighway 'E'" would have run in a trench just north of Bloor, exactly following the current route of the subway. At Church, it would have turned down the Rosedale Ravine, across the Don, and through the east end along Gerrard. Instead of an interchange subway station at St. George and Spadina, we would have had a major road junction. The subway, if it was ever to be built, would have gone been on track in the highway's median, Ă la parts of the Spadina line.

Superhighway 'B' - the Spadina Expressway - came dangerously close to happening; a bitter three-year fight eventually forced its cancellation in 1971. Here in the Master Plan, it intersects the Bloor superhighway roughly where Spadina station is now. Chalk this one up as a bullet dodged.

Images: "VIA 6445" by Stephen Gardiner, City of Toronto Archives, and Nippon Sharyo.