Nothing is ever really a done deal when it comes to Toronto's transportation. According to The Star, the TTC might become the operator of the city's new LRTs after all, despite Metrolinx announcing it was seeking a private operator two weeks ago. The provincial transit agency and the TTC are still discussing ways to keep the Commission in the picture over fears privately operated transit lines in Toronto would spell trouble. Should the TTC run the new lines when they're complete or is it time to give another company a chance?

Now that we're building transit lines, how would you prefer to pay for it? In a report released yesterday, Toronto's city manager weighed up ten different funding options available to local and provincial leaders as they seek roughly $2 billion for further rapid transit expansion. Among them, highway tolls, various tax increases, and parking fees. Time to get serious and pay up?

In something of a curveball yesterday, the City of Toronto called for expressions of interest from groups interested in running the Toronto Zoo. The attraction is having a bit of a tough time; it's elephants won't go to California and it has lost it's accreditation. A few weeks ago the zoo's board looked at ways of ending city meddling. Guess that didn't go so well.

Toronto's aging island ferry fleet could soon be sailing off into the sunset. The Parks, Forestry and Recreation division, faced with new safety restrictions that limit how many people the vessels can carry, is saving up to purchase replacements. Transport Canada required capacity on the Sam McBride and Thomas Rennie be roughly halved last spring.

Here's an interesting diagram. A map of the city published in 1915 that shows the population density of each city block. The most populated areas 97 years ago were around Queen and Bay in The Ward and west of University Avenue. Parts of the east Danforth are still empty. [via Reddit]

Time for another round of Guess the Intersection to keep you on your toes. See if you can identify where this laundry was located in Toronto and type your answers in the comments' sections. 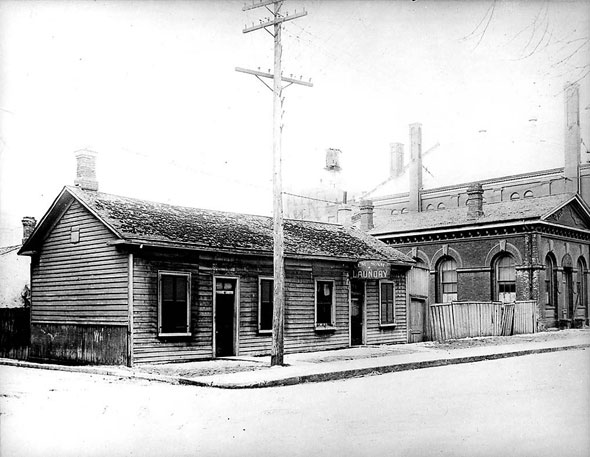