Former Ontario lieutenant governor Lincoln Alexander who died this weekend aged 90 will continue to lie in state at Queen's Park until 8pm tonight to allow mourners to pay their final respects. Alexander, Canada's first black MP and the province's 24th lieutenant governor, was born on Draper Street, close to King and Spadina. Two books of condolence are available.

Doug Ford says he's in favour of adding optional toll lanes to the Gardiner Expressway in an attempt to cover the rapidly increasing cost of maintaining the elevated road through the city. In the wake of a report that paints the crumbling highway as a danger to the public, Ford says adding toll lanes will help pay for the cost of new repairs. Would you pay to use a dedicated toll lane on the Gardiner?

Toronto police say they will make a "major announcement" in relation to the Bloor-Christie sexual assaults investigation at 10 am this morning. According to the CBC, police wouldn't confirm an arrest in the case.

In what might be the least surprising conclusion ever, a new report says cyclists are safer in separated lanes than on the street with regular motor vehicles. According to the Globe and Mail, the research from the University of British Columbia found bikers were ten times more likely to be in an accident on regular roads. Surprised?

The National Post says absenteeism at Toronto's 3-1-1 helpline is down significantly this year. According to the story, roughly 20 per cent of the service's staff were absent on any given day before new measures were put in place.

Churches in Toronto's industrial areas could be in trouble if a proposed bylaw amendment goes through. Roughly 22 per cent of Toronto's places of worship are located in buildings designed as factories and warehouses and it's feared future conflicts could arise over noise, dust and other annoyances from nearby industrial businesses.

Catering an event at the ROM is about to get a whole lot more expensive - the museum is asking companies to pay a $10,000 fee to be placed on a preferred list of suppliers. The catch? The fee doesn't guarantee any work.

Check out the "Geary for Mayor" poster on the side of the building. The poster refers to 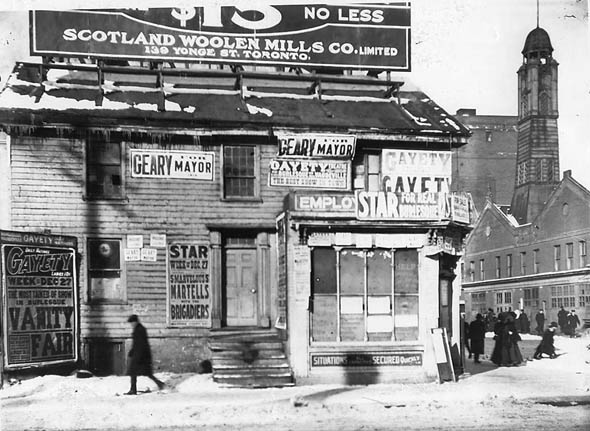 George Reginald Geary, the man who would successfully become leader of the city between 1910 and 1912. Can you place the streets shown here? Write your answers below.

Photo: "toronto misc. - 50" by sarathofkhan in the blogTO Flickr pool.