A TTC bus driver is being hailed as a hero after a tipped construction crane dropped live power lines on Kipling Avenue yesterday. The falling boom dragged live wires down onto the bus, creating a potentially deadly situation for bystanders. The bus driver, Ewa Kozlowska, kept passengers on board while Toronto Hydro shut off the power. Kipling remains closed between Brookmere Road and north of Rexdale Boulevard.

It might be "the ugliest urban waterfront boulevard," but plans are underway to try and solve some of the issues plaguing Queens Quay. The Star has a look at what's in store during an upcoming $110 million, three-year revitalization project.

After the recent death of a cyclist on Wychwood Avenue, councillor Denzil Minnan-Wong says banning bikes near the street's disused streetcar tracks is the best way of preventing further accidents. Minnan-Wong, the chair of the public works committee, believes the cost of removing the track that once led to the St. Clair Carhouse is too high while the city is trying to save money.

The hunt for wild sand tiger sharks to populate the new shark tank at Ripley's Aquarium - currently under construction near the CN Tower - is generating controversy. A petition with more than a thousand signatures opposed to the popular aquarium animals' capture off the South Carolina coast is gaining traction online.

Snacks are coming to Nathan Phillips Square. The city is currently accepting tenders for a five-year lease of a small new cafe in the south west corner of the square which must serve "high quality food."

Finally, it's not an intersection, but let's see if you can place where this archival picture was taken in Toronto. Answers in the comment section. 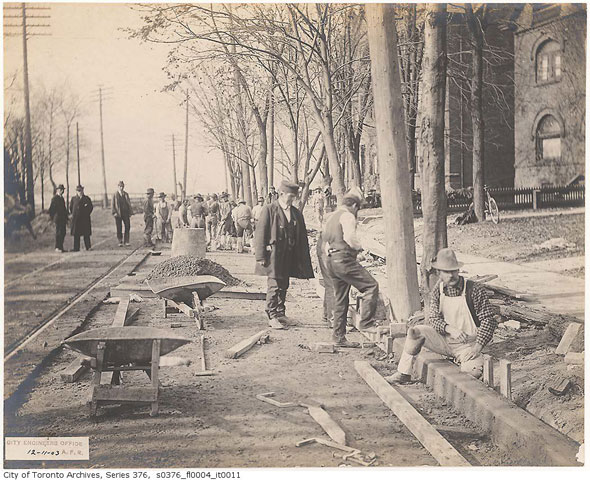 Photos: "Under Humber Bridges" by jer1961 in the blogTO Flickr pool and City of Toronto Archives.