165,000 Toronto homes west of Yonge Street had their garbage collected for the first time by private contractor Green For Life this morning as part of an $11 million cost-saving exercise by the city. If all goes well, the only noticeable difference will be the new trucks (oh, and the slightly later pick-up time in some neighbourhoods). It's expected private garbage collection will head to the east end in due course.

According to a Star editorial, Toronto will have to work hard to avoid following Atlanta - a city with similar transit difficulties that recently rejected a sales tax to fund new infrastructure - into gridlock. To help things along, the Greater Toronto Civic Action Alliance has produced a list of local leaders - including former Toronto mayor David Crombie and U of T president David Naylor - willing to champion a regional conversation about ways to fund the necessary new transportation upgrades. How do you rate Toronto's chances of successfully implementing a transit tax?

Talk of a condo on King Street West close to the TIFF Lightbox and the area dubbed "restaurant row" is continuing to cause grief. Several of the street's building ownerrs are worried a new 47-storey tower will create wind tunnel effect and put their historic properties at risk. Do you think concerns over the strip are justified?

Wayne Reuben, one of two Honest Ed's sign painters, spoke to The Star this weekend about his collaboration with Sarah Lazarovic, a 33-year-old Toronto artist, to create special, one-off signs displaying Toronto-centric slogans like "Been there, Dundas" and "Toronto. Where the Dees are Sneaky and the Eds are Honest." The signs will hang in the housewares department for a limited time.

Poetry on the Way, a 14-year-old program that displayed poetry on the TTC beside traditional advertising, seems to be finished. Thing is, no-one seems to know why. The displays and the person responsible for the project have apparently vanished into thin air.

Finally, if you've ever wondered 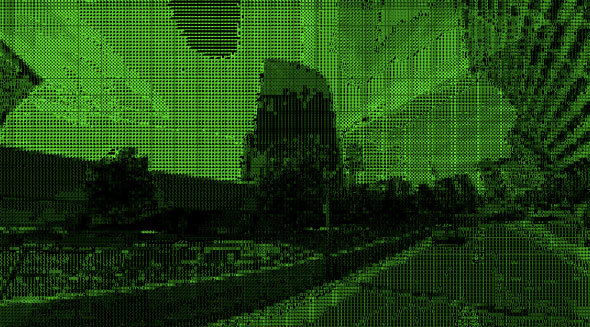 what Toronto would look like as the setting for an ASCII version of the Matrix (and who hasn't) then this project is for you. A group of programmers and artists, part of Toronto-based marketing firm Teehan+Lax, have created an overlay for Google Maps that converts normal Street View images into shimmering, intense ASCII works of art. Views of other cities are available too. Below is City Hall from Bay Street.

Photo: "Untitled" by dchant in the blogTO Flickr pool.