This week's extreme heat alert gave way to extreme rain yesterday as 50 to 75 mm of rain fell on parts of Toronto in under and hour. There was flash flooding, landslides, sinkholes and general all-round craziness during the deluge; in Whitby, 17 people were injured when a tent was struck by lightning. The heat and humidity are set to return today.

At the same meeting, Rob Ford was the lone dissenting vote on a raft of community development grants that would have otherwise passed unanimously. Ford is at least consistent--he's voted against these grants in the past, always without explanation.

In gross news, the city has failed to shut down a fleet of hotdog carts cited for multiple health violations. One--at Queen and Simcoe--was found to be infested with mice. Toronto's civilian licensing tribunal decided to give Elisaveta Moskova, the owner of the stands, another chance. At least she'll be serving nuts and fresh salads now, right?

The conversion of Downsview Park from military base to verdant park has made a ghost town out of the former military housing units at William Baker Park, the neighbourhood where stationed personnel and their families lived. The National Post took a look around.

While the Blue Jays are playing out an even-steven sort of season on the field, in the dugout bench coach Don Wakamatsu is wowing the team with his handwriting on the team's lineup cards.

And finally, a jokester on the streetcar with a pen and strip of tape has made a much more relevant warning sign for those about to disembark TTC streetcars. (via Reddit).

The contest is back after a break last week. See if you can find out where this is in Toronto. 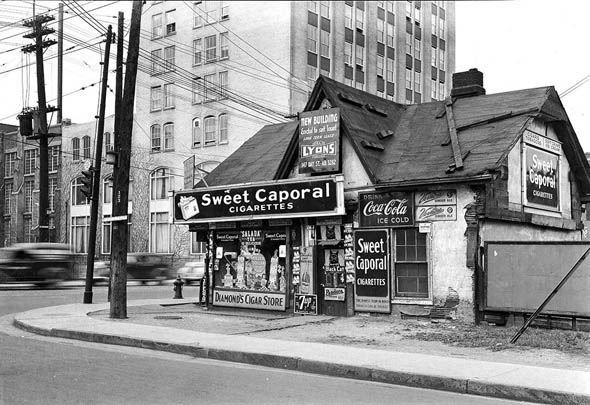 Photo: "Untitled" by SasiShan in the blogTO Flickr pool.