Looks like Rob Ford is ready to do battle over the fundamentals of Karen Stintz and Glenn De Baeremaeker's OneCity transit plan. The mayor has formally asked the city manager for a two-year property tax freeze starting in 2014, the year he will stand for re-election. Stintz and De Baeremaeker plan to fund their project, which the National Post is already calling dead, with, you guessed it, a property tax hike. The tax freeze will likely be one of the building blocks of Ford's campaign and puts him at loggerheads with the transit expansion plan.

Also in Ford news, the mayor has responded to Adam Vaughan's suggestion yesterday that he is a "part-time mayor" by claiming he is the hardest worker at city hall. Is that a bit of a stretch?

It might be 14 years behind the New York subway, but the TTC is planning to spend over half a million dollars installing temporary debit card machines in all its subway stations ready for the end of next year. In 2013, Metropass users will be able to pay by debit. All other fares will remain cash only until Presto arrives in 2015.

The power is back on after a blackout killed air conditioners, fans and other cooling devices for a large area of east downtown last night. Good thing too - it's supposed to be an absolute scorcher today with temperatures in the high 30s. Hydro Toronto says a fire in a circuit breaker caused the outage.

If you've had to wait in line for a ferry to the Islands this summer, here's why. Several of the City of Toronto's oldest boats, the William Inglis, Sam McBride, and the Thomas Rennie, are being forced to run at half the normal capacity by new federal marine safety standards. Boo! Safety!

The subway riders among you have probably noticed the confessional videos revealing everything from heroin addictions to uncontrollable farting at track level by now. Showing on the TV system roughly every 10 minutes, the short, real life admissions are part of a project called Confessions Underground that will be running until July 15.

Should we be installing fully separated bike lanes on busy streets like Richmond and Adelaide rather than relatively quiet Sherbourne and Harbord? Dylan Reid at Spacing thinks so. He explains it doesn't make sense to over-protect cyclists from relatively slow moving traffic in some parts of the city scheduled to get separated lanes.

And finally, more complete and utter idiocy from The Sun. Writer Lorrie Goldstein says the root of gang crime in Toronto is absentee black fathers who "impregnate as as many willing women as they can". Predictably, the editorial is filled with fallacies and prejudices that are both embarrassing and depressing.

An earlier version of this post incorrectly stated that the boats William Inglis, Sam McBride, and Thomas Rennie were the property of the Toronto Port Authority. They are owned by the City of Toronto.

Turns out I gave some bum clues yesterday that unfairly threw some people off the scent. Give this one a crack and I'll try to keep any clues accurate. 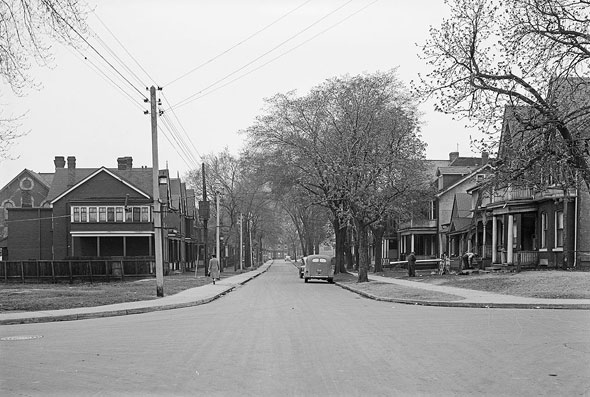