A new bylaw proposed by Councillor Paul Ainslie that would require owners of vacant properties to commit to minimum levels of maintenance could help reduce the number of neglected properties across the city, according to the Toronto Observer. Modelled after a similar law in Winnipeg, the new legislation could protect historic abandoned properties like those on George Street we profiled yesterday. Are there any vacant and dilapidated buildings in your neighbourhood that need sprucing up?

Despite being granted an injunction to stay at Queen and Broadview until the end of the year, the Real Jerk is looking shove off as soon as possible, according to the Town Crier. Owner Ed Pottinger reportedly has his eye on several locations, though he's keeping mum about the possibilities. The restaurant famous for its sunny sign has been jerkin' around in the Riverside neighbourhood for more than 20 years.

With the change in seasons comes the influx of fair-weather cyclists and the inevitable traffic increase in the bike lane (if it hasn't been torn out, that is.) The Globe and Mail discusses the perennial battle between doddery old farts on folding bikes and lycra-clad speed freaks, mini snarl ups at intersections as well as other stressors of life in the bike lane.

A totally kerazy April Fools' joke pulled on John Filion of the Board of Health has garnered the attention of Howard Stern on his radio show. Several fake names including Heyward Yablowme, Isaac Cox and Anita Hoare (say them out loud) were added to the list of speakers and read out at the meeting. Joke of the century contender, no doubt. (via Jonathan Goldsbie and Claire McWatt)

As long as people have been writing their names on walls under the cover of darkness, graffiti has been a touchy subject for people living in large cities like Toronto. Trouble is, there's graffiti and there's tagging, which is for many people the difference between art and vandalism. According to OpenFile, some property owners feel the current tagging and graffiti removal laws need to change.

The Grid snagged an interview with the "streaker" who invaded the field at the Rogers Centre Tuesday night. Apparently the semi-nude excursion (he kept his underwear on) was a life-long dream of the 17-year-old Waterloo high school student. The letters "YOLO" painted across his chest stood for "You Only Live Once." 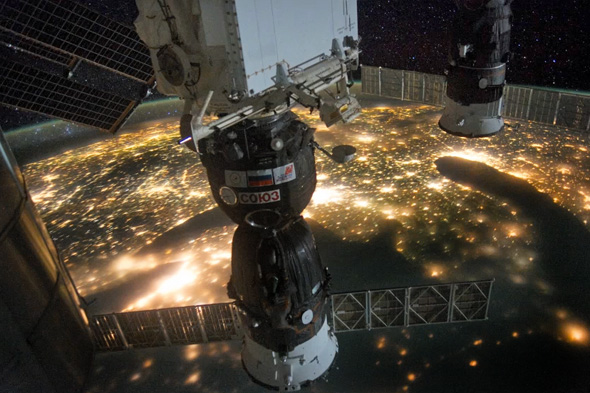 And finally, if you noticed a fast-moving star shooting across the sky last night, that was probably just the International Space Station making an appearance. This is actually a pretty common occurrence, but awe-inspiring when you stop to take a look (thanks for the tip, Metro Morning). One suspects, however, that the astronauts have the better view. The above image, taken March 15 (taken January 31 / posted March 15), shows the Great Lakes region and cities like Toronto, Detroit and Chicago. [Photo via The Gateway to Astronaut Photography of the Earth]