City council has officially signed off on CUPE Local 79's latest collective agreement, saving itself $50 million over the next four years and removing the threat of strikes for many indoor workers. Mayor Ford proudly told reporters: "There won't be any labour disruptions over the next four years. The union's happy, we're happy and now we can get ready to host the Pan Am Games."

The infrastructure upgrades required to manage the extra electricity demand caused by Toronto's condo boom warrants a rate hike, says Toronto Hydro. The city is building domestic towers at a rate faster than any other North American city and the energy provider says it needs another power station - the proposed Bremner Station suggested for Roundhouse Park near Rogers Centre - to keep up with demand.

A ruling by the Ontario Court of Appeal has upheld Toronto's billboard tax laws after a challenge by the outdoor advertising industry. According to Torontoist, the tax was coupled with a bylaw that regulated the size, placement and content of advertising boards. Now the court has ruled in the city's favour and struck down claims it was outside its authority when it created the billboard tax, Toronto expects to generate roughly $10.4 million in arts projects funding.

The West Toronto Railpath - the bike trail that runs alongside the Georgetown GO tracks between Cariboo Avenue and Dundas Street - won't be completed until at least 2016, according to the National Post's Information Booth column. The trail was supposed to connect with the waterfront trail but construction on the air-rail link on the Georgetown corridor has significantly delayed the project.

The forlorn looking fountains on University Avenue north of Queen will once again gush water this summer after three dry years gathering trash beneath plywood boards, reports the Star. The water features were turned off and drained in 2009 when water began to leak from the pool into Osgoode subway station. The city considered the repairs a low priority until recently.

Taking its first Bambi steps into the 21st century, the TTC is wrapping up its test of wireless debit and credit card Metropass payments at Union Station this evening. The Commission will study the results of the six-day trial, taking into account line-up times, wireless signal and transaction times. The general idea is to reduce the amount of cash used in the system in the near future.

Today's mystery intersection features a hidden message of peace. Can you tell where it is? 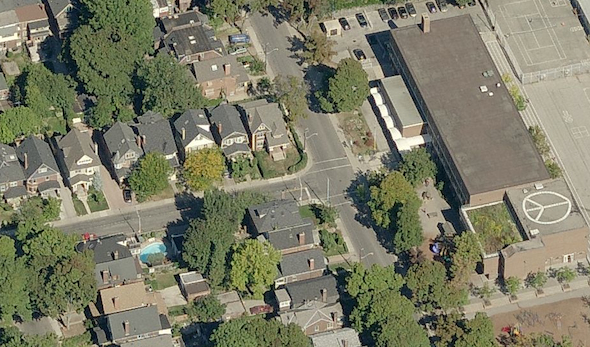 "So Close but Yet So Far" by b.m.a.n. in the BlogTO Flickr pool. Map image: Bing.