It's back to work for the City's 2,300 library workers this morning after their 11-day labour dispute was officially resolved yesterday. CUPE Local 4948 expects all branches to open at 10:30, so bring back that overdue paperback before fines start to accrue. Job security was a key issue for the striking union members and the settlement guarantees that no full-time jobs will be cut back to part-time.

Revisions to the Waterfront Toronto plan for the Port Lands would "gut" the original design and rob the area of "all that is special" says Ken Greenberg, a member of the original design team in an interview with the Globe and Mail. The revised plans, created in a partnership between the city and Waterfront Toronto, reduce the size of a proposed riverside park amongst other things. Yesterday, Doug Ford said "I told you so" when several of the revised ideas matched his earlier plan, but without the monorail, mega-mall and ferris wheel.

A controversial subway advert by Bus Stop Bible Studies that sparked a review by the TTC over its advice to children with drug-addicted parents isn't going anywhere. Since the advert doesn't break any laws or the TTC's policy, there's nothing that can be done to remove it, a TTC spokesman told OpenFile.

Yesterday's federal budget reduced overall spending by making changes to old-age security â including retirement age and pensions â and canning the humble penny. The GTA's proposed Rouge River national park is still in the works, though we're still waiting on many of the details. OpenFile has a good article detailing the aspects of the budget that will affect Toronto.

Popular alternative theatre space and punk venue Siesta Nouveaux will slip into the deadpool Saturday night when it hosts its final music shows. According to the event's Facebook page, the owners are being evicted from their current property at Lower Sherbourne and Esplanade to make way for a condo development. Guests are invited to "bring a beer, shed a tear, and have a good time."

A belated pro-subway leaflet distributed by the office of Tim Hudak to roughly 100,000 Toronto residents has been met with some confusion for its unusual timing. According to the Torontoist, Hudak believes Metrolinx should "work with the city to build subways" despite numerous council votes in favour of LRTs. We'll wait to see whether Rob Ford uses this as ammunition in his expected fightback.

GTA goose attacks go viral. In the clip, the unidentified man approaches a territorial bird unaware he's walking into a feathery ambush. In the ensuing melee, the man attempts to fend off the goose with a newspaper and make a hasty escape, but the bird has other ideas.

Another round of guess the intersection. This one's much harder than yesterday's - have fun. 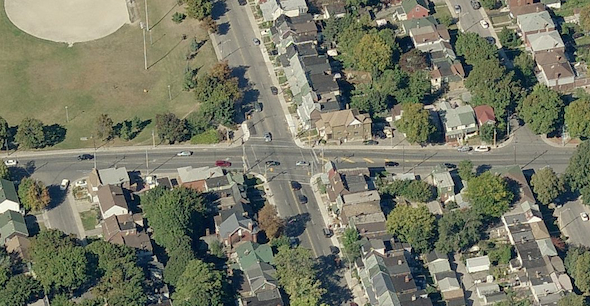