Morning Brew: More on the Yonge and Gould fire, ideas for Ontario Place, police budgets continue to rise, documents to be turned over in Adam Nobody case, and the Leafs go mental in Atlanta

Heritage buildings continue to occupy the minds of writers and editors in the wake of the fire and subsequent demolition of the former Empress and Edison hotel at Yonge and Gould. Not only is a police photo of a person of interest making the rounds, but this morning the Globe takes a longer look at the troubled (recent) history of the William Reynolds Block (something we did altogether differently after its north-facing wall collapsed) and its current owners, the Lalani Group. Not to be outdone, the Star has a feature on six other heritage properties along Yonge St. and what's being done (or not done) to preserve them.

After making a call for proposals on how to revitalize the aging waterfront park, officials at Ontario Place were "flooded" with ideas from both established firms and ordinary citizens. although John Tevlin, the general manager, remained mum on specifics, some general information about the submissions has been shared. Here's a short list of some of the more notable ideas his office has received: floating hotel, zipline, free outdoor movies and free concerts, restaurants and pubs offering variety of food, a microbrewery, lots of cafes and shops, skating rink complete with hot chocolate stand, enclose Molson amphitheatre for year-round use, golf course, casino, aquarium, planetarium, and a velodrome.

Funding the police is taking up a larger and larger portion of municipal budgets as officer salaries continue to rise above the inflation rate. And as the Toronto Police gear up to negotiate their cut of the city's next budget, the Globe has an interesting graphic that compares what portion of the total budget police funding accounts for in various cities across Canada. 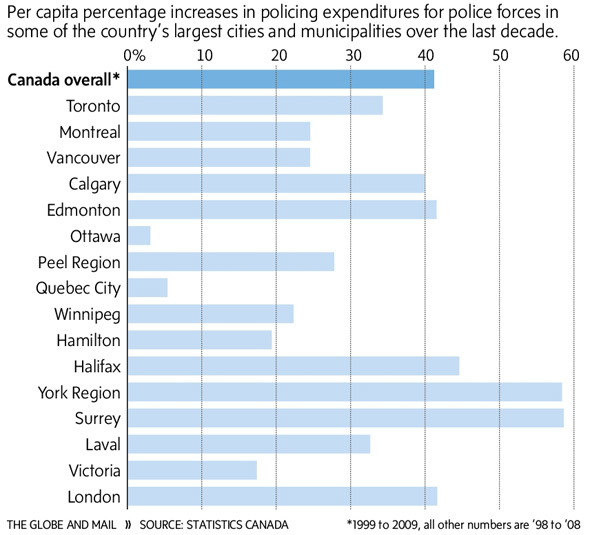 The judge in the Adam Nobody case has ordered the SIU and police to hand over all records related to the officers under investigation. After he reviews the documents in question, he'll decide whether or not to provide them to the defence. Stayed tuned...the blue wall may yet fall.