The Harmony Dinner, a fundraiser to help mayor Ford and three of his former rivals erase their campaign debt, is coming up next Thursday. However, ticket sales have been lagging, so the sales deadline has been extended and a cheesy group photo of the guests of honour has been distributed to drum up more interest (see below). Like that'll work. Apparently the photo shoot was the first time the candidates were in the same room since the campaign and they were "smiling" and "laughing"and Smitherman was cracking some jokes. Yeah right. Politicians don't laugh and smile unless they want something. Oh, wait... 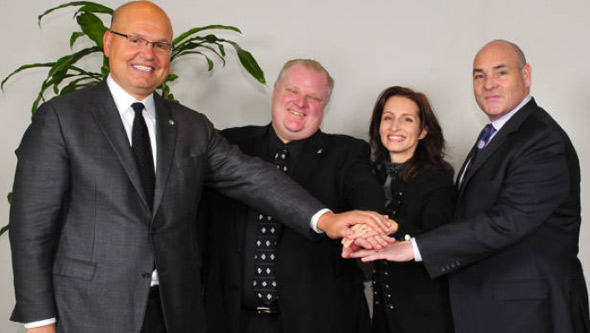 What terrible day for this to happen. About 1,000 residents have been forced to leave their freezing apartment building at 35 St. Dennis Drive in the east end since they have been without power since 4 p.m. yesterday. The building's manager says it's a problem with the building's internal electrical system, compounded by a burst sprinkler pipe in the underground garage. It's unknown when exactly the residents will be allowed back into their apartments.

Not surprisingly, the football-crazy Ford brothers (Rob and Doug) want to bring the NFL to Toronto. "To be a world class city, at least a North American world class city, we need an NFL team," noted Doug Ford. The brothers Ford feel securing a franchise--with a likely $1 billion price tag--would be a powerful job creation plan all by itself because the city would need another dome to house the team because apparently the Rogers Centre just won't do.

More G20 aftermath and investigations. A video (which has been online for ages) showing a York Regional Police officer telling a protester he is no longer in Canada and has no civil rights is under investigation. The officer in the video, who's been identified as Sgt. Mark Charlebois, said in an email that he would love to speak but couldn't because the matter was before the Ontario Independent Police Review Director.