Lakes, rivers, and swimming pools in Ontario have claimed the lives of 13 people so far this summer, and safety regulations (especially at unsupervised pools) are being called into question. Apparently 99% of drowning deaths occur in waters without lifeguards. Should condos, apartments, and hotels hire trained staff to watch over swimmers, or should we continue to put the onus on parents and people to watch out for their own and themselves?

Some rather dark irony struck at a violence prevention community barbecue in the Jane & Weston area yesterday. A man was hit by stray gunfire, and was carted away by paramedics. Police don't believe that he was targeted, are looking for two suspects, and hope that home video footage might help in the investigation.

The University of Toronto is exploring the idea of major renovation and expansion of a 135-year-old "Gothic Revival" building on Spadina Crescent (just north of College Street). The building is currently home to the faculty of visual arts, a student newspaper, as well as labs and offices. But with tens of millions of dollars in work, it could be a swanky new visual arts, architecture and urbanism complex. 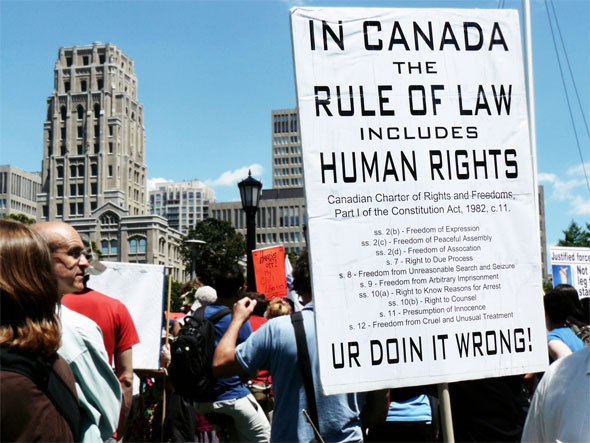 A number of anonymous commenters on blogTO have been critical of my continued coverage of G20-related news in the Morning Brew. Some have suggested that we forget about civil liberties and "move on" and forget about the "stupid hippie protesters" who "deserved" to be rounded up and locked up because "they should have known better" than to get involved in political rallies after the June 26th Black Bloc violence. Others have suggested that we change our name from blogTO to blogG20. While we have no intentions of abandoning our extensive fashion, music, food, film, tech, etc. coverage (i.e. please see the vast majority of what blogTO publishes), a group of "cross-media activists concerned about the erosion of democracy in our Country" have made it their mandate to blogG20. See The Real G8/G20: A Civil Society Response.

A couple of poignant post-G20 editorials appeared in the Toronto Star this weekend, and suggest that people are looking to the higher ranks for explanations. Are the Toronto Police taking too much of the brunt of the criticism, or should we be looking for answers from those who called the shots from above? When a Progressive Conservative MPP refers to the actions of our Liberal Premier and our Conservative Prime Minister as tyrannical, we can get a sense of the magnitude and complexity of the political drama that will likely continue to unfold for years to come.

And in much less important but far more welcome news, Spain defeated The Netherlands to win the World Cup in nail-biting, last-minute style. Celebrations erupted on College Street at Bathurst, and for a while it felt like a real street party. Tap, tap. Excuse me, kind sir, but you're going to have to take your beer bucket, replica trophy, and exuberant self and get off this here streetcar.

Photos by collette v and *Lemur*, members of the blogTO Flickr pool.