The leaders and delegates landed, the massive police presence was immediately observed, mostly peaceful protests were conducted on Friday, and on Saturday things got really out of hand.

Then came the many videos depicting the wild scenes on the streets (police posing as protesters, vandals lighting police cars on fire, coffee shop windows being destroyed, a protester getting run over by police on horses, and more). Violence was seen from protesters and police alike, it was nothing short of madness, and the saddest part of the whole story is that many of the messages that peaceful protesters were trying to convey were lost in the chaos or quashed by police in what sounds like unfair and demeaning ways. 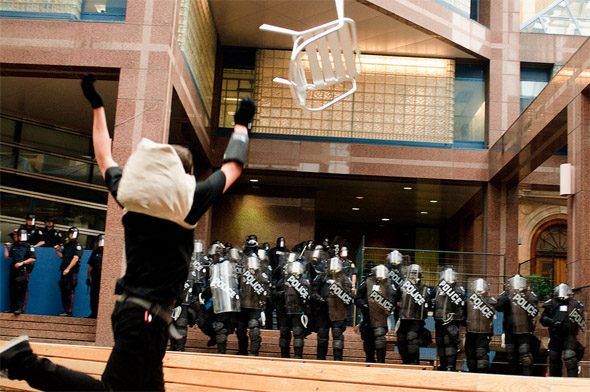 The debates following the G20 weekend in Toronto will no doubt be profound. Did McGuinty do us any favours by quietly giving police sweeping powers and not telling us? Did police respond to the violent protests accordingly? How did a small group of violent anti-G20 demonstrators manage to bring chaos to our streets and steal the media spotlight? Did the police respond to peaceful protests accordingly? Why were so many journalists arrested and/or detained despite being accredited? Why were police conducting illegal searches and property seizures in locations far from the security zone, despite knowing that such actions are unlawful? Were the $1B in security costs justifiable and well spent? Most importantly, I think we should be questioning why it was allowed to happen in the core of our city in the first place.

Mayor Miller will be speaking to the us via the media at 11 a.m. today. Tune in if these are issues that are important to you.

In the meantime, here's some much-needed comic relief: 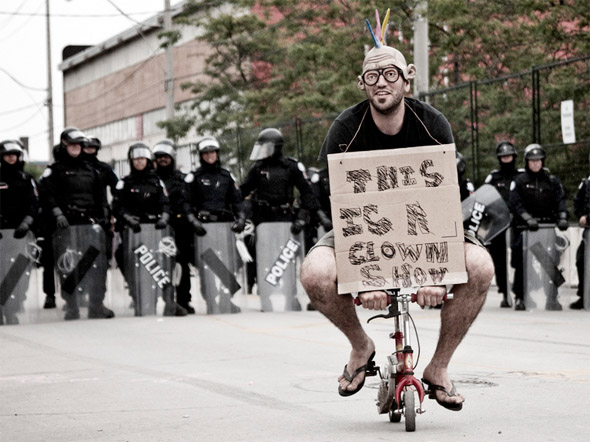 VIA Rail and the CAW came to an agreement in principle this weekend, averting a labour strike that would have come into effect today.

The OSPCA cancelled a planned animal adoption blitz in Newmarket after the organization and a number of people who'd planned on adopting were subjected to a stream of threats.

Union Station had to be closed and a number of streets and highways were shut down after torrential downpours caused flooding last night.

A number of Toronto-based tech tools for the social media and mobile phone lovers that are also soccer fans are making this year's World Cup tournament extra fun and interactive.

And there's a frozen yogurt rivalry going on in Toronto -- between Mon Berri (at Bloor & St. George) and Blushberry (on Queen West). According to Elizabeth -- and after visiting both for a taste test -- Mon Berri comes out on top.

Photos by poyanp, Fifth_Business, and Paul Flynn (Toronto) -- all members of the blogTO Flickr pool.