Will you take part in plans for a mass walk-out G8 protest on June 25th? The "No One Is Illegal-Toronto" group are calling on Torontonians to ditch work, join their block party, and set up a tent at Allan Gardens while the world leaders meet up in Huntsville. While their causes are in many ways noble, I'm not convinced that many outside the activist camp will risk their jobs to partake. In other G8 and G20 news, there may be enough hospital beds freed up, but it appears that there's going to be a shortage of blood.

A last-minute deal amongst federal governing parties has resulted in a crucial element of the criminal justice system being altered. Part of the Conservatives' moves to be tougher on crime, the bill addresses the rules for the issuing of pardons to convicted criminals, and will be fast-tracked into practice. The national parole board will now be able to deny any pardon that would "bring the system into disrepute" and periods of ineligibility will be extended. In other words, Karla Homolka won't be eligible for a pardon in a few weeks, and probably won't be granted one when she is eligible. Thankfully, the opposition parties have successfully deferred the rest of the bill (now dubbed C-32B) to the fall, when parliament can give it the full attention it deserves.

There's more weirdness from the Rob Ford mayoral campaign in the news today, and it's related to the gay couple who are suffering from HIV and had an awkward, media-mediated apology session with the mayoral candidate back in May. The relationship between the couple and the councillor has soured after phone conversations were recorded, and an inappropriate request was made of the councillor to assist in obtaining prescription Oxycontin illegally. And apparently both sides have complained to police about threatening language. In related news, I'm proposing the following for the official theme song for the Ford mayoral campaign (see video below).

A veteran police officer at 52 Division is in hot water and facing suspension with pay while he faces theft charges. It's alleged that constable Ganesh Balaganthan stole police-issued property from another officer, although police won't say what exactly that property is. The lack of details is what makes this story intriguing. What police-issued item could he have stolen that was worthy of criminal charges (rather than settlement of an internal workplace issue)? Was it a firearm? A badge? A uniform?

Why buy new, when you can have this snazzy couch -- for free! (photo by blogTO Flickr member 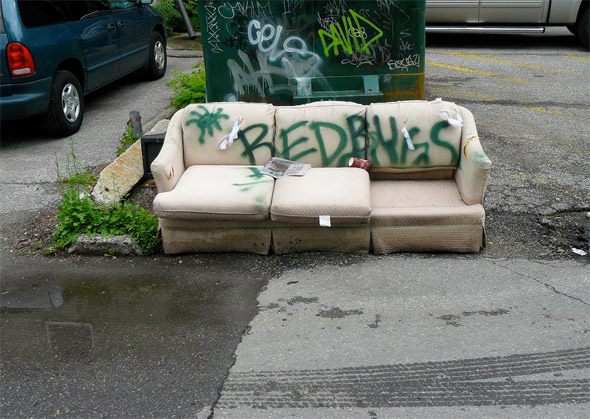 Lead photo: "Passing through" by BruceK, member of the blogTO Flickr pool.