Lausberg Contemporary comes to Toronto by way of D端sseldorf, but in the five years since they opened their first space on Queen Street near Trinity Bellwoods park, their engagement with this city has grown. The gallery has grown, too, so in February 2011 they opened up their first show at their new address, 326 Dundas West, in a strip of old Victorian homes in Dundas Street--right across from the AGO.

It's a pretty big contrast from Toronto's biggest public gallery, and not just because it is small and privately owned. Lausberg's mandate is to exhibit contemporary art, particularly by artists who work in a Minimalist mode, or in the Op Art tradition. Yet there isn't the rigidity I was expecting; some works don't conform as readily to those styles, but there is still a certain whimsy or sensuality in the works on display. 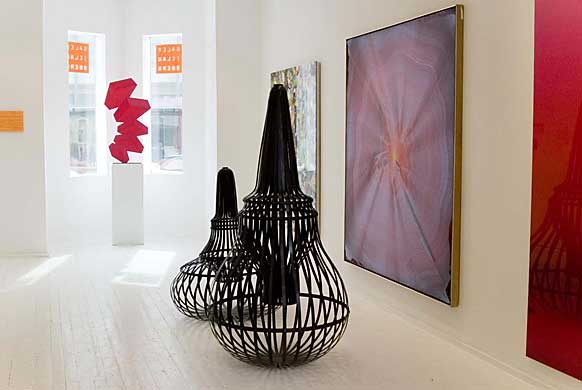 Since the gallery got its start in D端sseldorf, many of the artists on the roster (about 50 in total) are German. The current exhibition, however, includes Torontonians like Rui Pimenta, James Robert Durant and Sophie DeFrancesca. 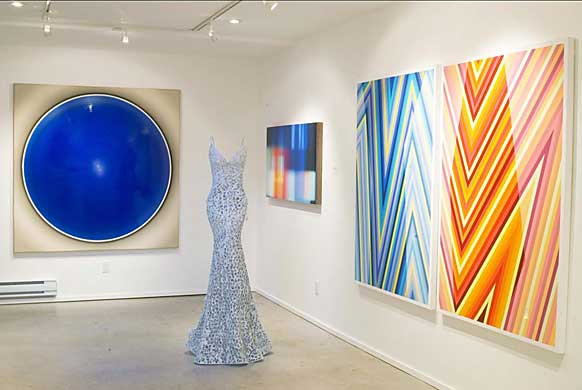 Their other gallery neighbours have been receptive, and in fact, Tien Huang of Bau-Xi Gallery (and Bau-Xi Photo ) is Lausberg's landlord. When the former occupants of 326 Dundas West decided not to renew their lease, Huang began to look for a new tenant, and hoped to find one that would attract like-minded visitors to the area, such as an art gallery, and coincidentally, Lausberg's lease period was coming up. Needing a larger space, and ready for a change, the decision was made to move. 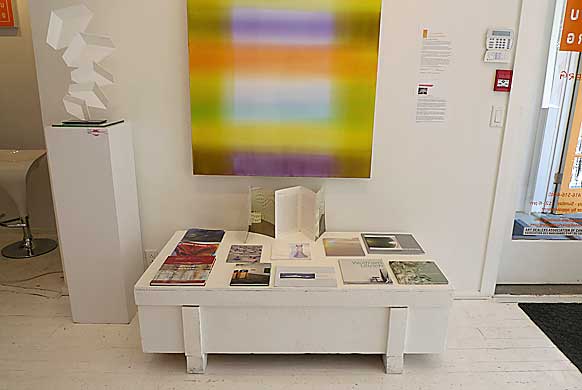 Co-director Brian Torner came to the gallery world through a similarly serendipitous route. A former dance artist, he met his partner Berndt Lausberg in D端sseldorf while traveling for work. Fast-forward a few years, and Galerie Lausberg was founded in D端sseldorf in 2002. After receiving a lot of positive feedback at the Toronto International Art Fair in 2003, the pair began looking to expand to Toronto. "It gave us the courage to have the dream to open up the space in Toronto," Torner says of that pivotal experience. The gallery opened its doors at 880 Queen Street West in October 2006. Since then, they've also expanded to Miami, where, Torner tells me, Minimalism is currently experiencing a growing audience. 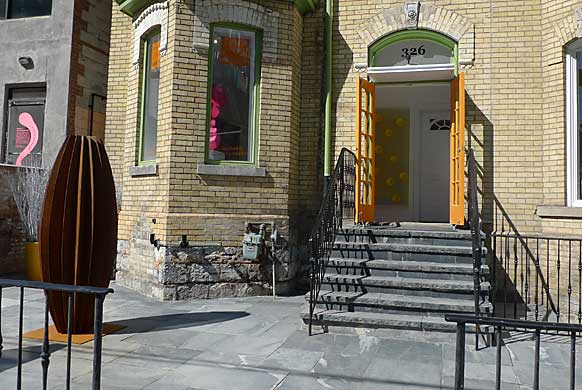 "Toronto's so eclectic, I think it can support many neighbourhoods with art galleries; with their own flavour," says Torner of moving away from the city's officially-branded "Art and Design District" -- a label that has never quite felt as organic as the area it describes. He describes the gallery's traffic so far as being very different from the Queen West crowd: the biggest shift being more tourists who are in the area to shop or visit the AGO. Torner's hope is that Lausberg Contemporary will act as "an interesting portal" to Toronto's independent art galleries.