Or, at least, I really like it. Part of me wanted not to, but after talking with the founders and seeing the space, I've been won over.

The little I knew of the recently opened (April 2009) Parkdale gallery before I made my visit was that it was a warehouse space that didn't look pretty in pictures. Post visit, I can't say that this initial information/impression was completely incorrect. It isn't what most would expect of a gallery space, and on it's own (empty), it's not particularly nice looking. But that's where the fun - and the art - begins.

While the three founders (Jennifer McGregor, Jaclyn Quaresma, and Dennis Lin) of 47 are all academically trained, their aim with this space is to exceed their various backgrounds in Renaissance painting, contemporary art history and industrial design to shape something that challenges what might be termed the institutionalization of the gallery.

To put that differently, a main element of 47's mandate is to diverge from the idea/ideology (more the latter) that the art gallery is a neutral space. Sure, that's defined in the negative, but I'm not sure that there's any other way to go about such a directive. The white-walled, high-ceilinged and brightly lit art gallery still provides an extremely pervasive and seductive model of what an exhibition space should be. Running against that grain - and all its various associations - is a challenge that is shaped by, at the very minimum, subtle revolt. 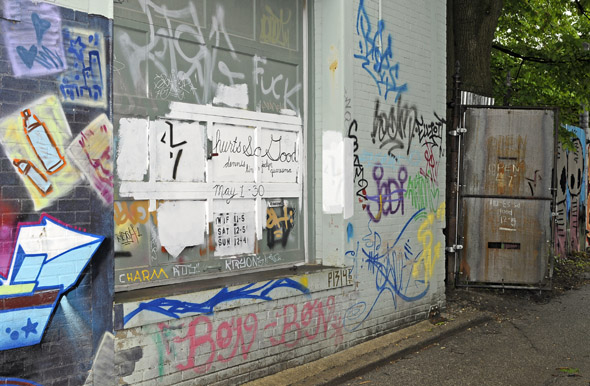 One of the founding principles at 47 is that the separation of art and its surroundings is never fully possible. I'm sure that the desire to highlight this is at least partially the result of the nature of the space in question, which in the absence of full scale renovations forces an unconventional approach to displaying artwork. A converted woodshop, there are no walls that would easily accommodate the hanging of paintings, no track lighting, and its sheer size can make it seem vacuous. But rather than lamenting these characteristics, the trio at 47 have instead embraced them as a challenge and an opportunity.

Regardless of whether we often think about it, the context in which we view art always plays a role in determining our appreciation of it. Playing with this idea, 47 aims to be an exhibition space that caters to installation-based work that somehow utilizes the unconventionality of the environment to create shows that couldn't really be pulled off elsewhere. 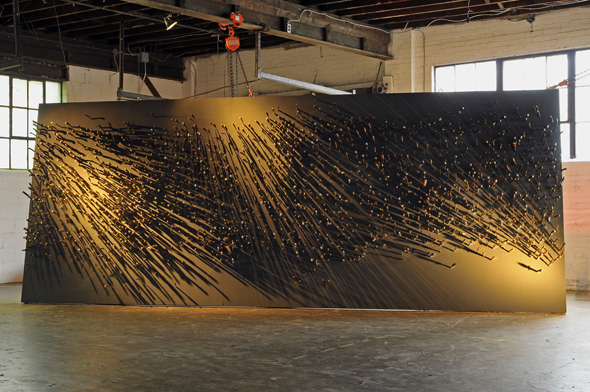 As I was speaking with Jaclyn and Jennifer about 47, I couldn't help but recall Michael Ondaatje's novel, Coming Through Slaughter . In it he (re)writes the story of Buddy Bolden, a turn of the century American cornetist whose music was never recorded. According to Ondaatje's narrative, Bolden's music could thus only be understood/appreciated in the temporal and spatial context in which he played it. Every song was a performance that depended in equal measure upon the setting, the crowd and the music.

There's a compelling argument to be made that this is true of all art - that each interpretation (and the context that accompanies it) modifies the meaning of the work in an unending process. A space like the one at 47 explicitly stages this by forcing both the artist and the viewer to operate outside of what's generally expected of a gallery. Call it defamiliarization. I find that when I'm put outside my comfort zone, I lose some of the complacency that I've unconsciously acquired. I think that's true for everyone. Things that are different and strange tend to engage us in a way that the everyday cannot. 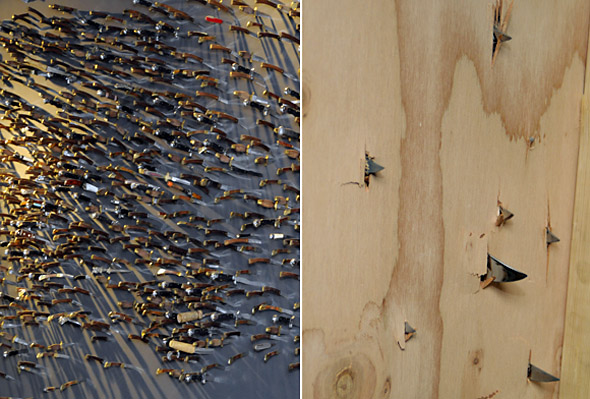 A less sympathetic reviewer might note that all of this is rather convenient. What else could be done with such a space? That might be somewhat fair, but to talk to the people behind the gallery is to see their obvious enthusiasm. The mandate may take shape as a result of the gallery's inherent characteristics, but I don't think that's really a bad thing. Indeed, Jaclyn and Dennis had originally planned on using it as a studio space, but along with Jennifer they fell in love with the idea of opening it to the public. Plans are also in the works to use the ample outdoor area for both exhibitions and events - all part of the goal to maximize what the space has to offer. 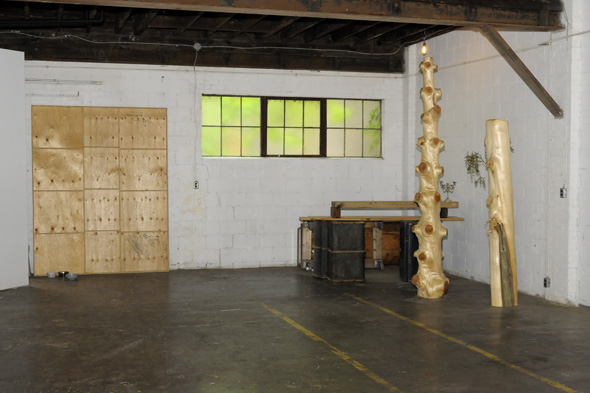 Despite my own enthusiasm with 47 and its mandate, being in its infancy there are some challenges that will need to be addressed. The current exhibition provides a good example of what I'm talking about. It stages both the promise and the potential problems posed by the (huge) space. On the one hand, it's an excellent use of the layout. The knife-strewn 8'x28' wall beckons the viewer to walk around it, to take in both the front and the back of the piece, and to engage it as an installation proper. But, on the other, it alone just can't fill the entire space. The viewer can't help but search the remaining area for more stimulation. While the piece is complete, the exhibition is not.

This, however, is hardly the stuff of failure. Over time, I'm quite confident that the collaborative efforts between those at 47 and the artists who show there will find new and intriguing ways to incorporate the entire exhibition area. For now, they're off to an auspicious start.