Archery District is an interactive archery experience in Mississauga. Until now, if you wanted to emulate Katniss Everdeen , Daryl Dixon , Cupid , or any other badass fictional archer/murderer, you'd have to stick to seasonal cosplay and steamy first-person fanfiction.

Thankfully, this brand-new Scarborough facility has arrived to fill a void in Toronto's adventure-gaming scene: Equipped with a shooting range and a large playing field, Archery District combines archery with aspects of paintball and dodgeball to create a competitive team-based game. 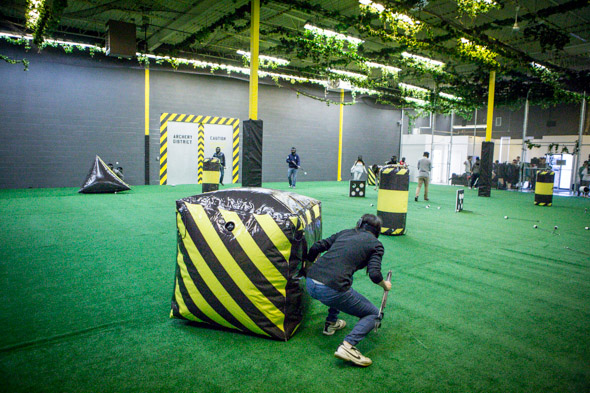 I visited the new facility on a Saturday afternoon. Hidden in a plaza with government services and low-carb grocery stores, Archery District is surprisingly large. After the entrance, there's a desk to register, sign waivers, and buy post-game snacks and drinks (all $1), with a coat rack and cubby for shoes and bags. On the other side is a practice range with various targets.

Then, through a chain-link fence, is the playing field. The field is huge, with astroturf on the ground and large inflatable bunkers to hide behind. It's 5000 square feet of pure pretend-violent fun. 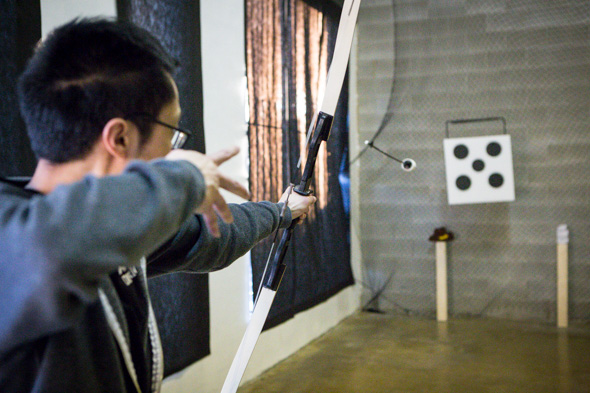 Though Archery District was only a week old at the time, the place was already packed with full bookings throughout the day. Guests are asked to show up 15 minutes early to their hour long session ($24.80 per person per hour) to fill out a waiver and complete a quick archery tutorial. 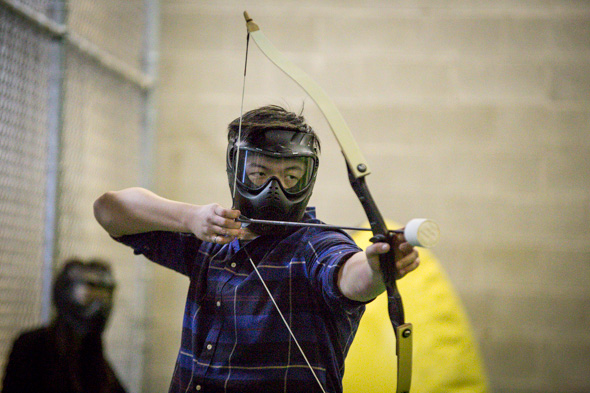 Even for old archery experts like myself (I had a Nerf crossbow as a child), the tutorial is incredibly useful. A staff member took my sessionmates and myself through the basics of shooting an arrow and zoned in on any flaws or safety concerns in the way we were shooting.

The staff also used the time to answer our many, many questions. ("Does it hurt to get shot? "No, the arrows are tipped with a foam marshmallow." "What if I get hit in my eye?" "You'll be wearing a face mask." "How fuckin' sick do I look right now shooting this bow and arrow?" "Uh, yup.") 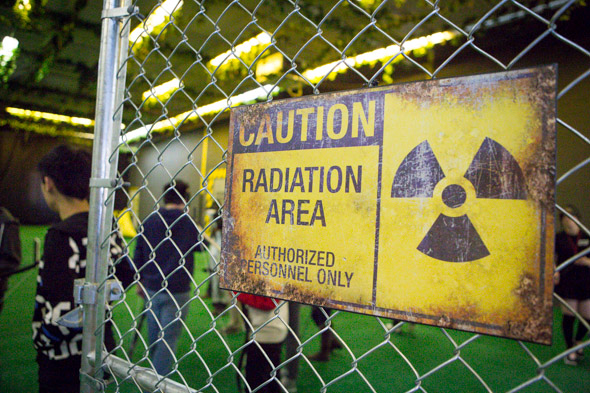 After the tutorial, we were herded into the playing field. The referee explained the rules (for this session, we followed basic dodgeball rules with a few extras added in). The game lasts until all members of one team are out or ten minutes are up. After the game is over, teams reshuffle if needed and another game begins. This goes on until your 55 minutes of play is up. 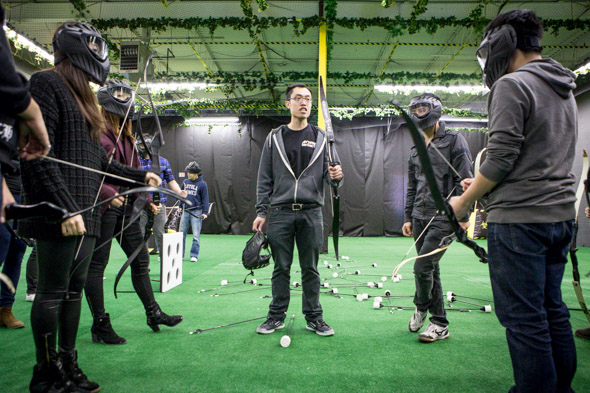 After explaining all the rules and handing out bows and masks, the referee counted down and suddenly we were all running towards the centre, grabbing arrows and then sprinting back to hide on our side of the arena. 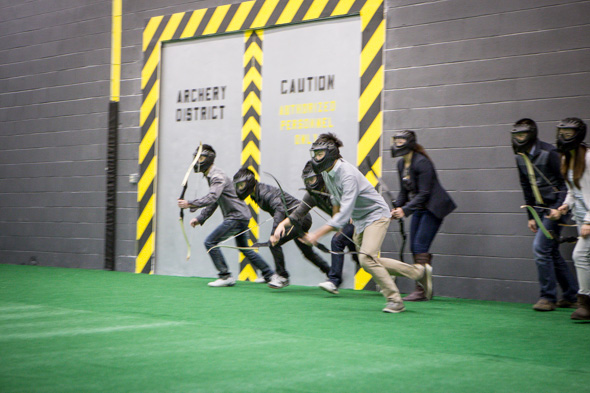 While shooting targets and warming up was enjoyable, the actual game portion of archery tag was unbelievably fun. People were running and yelling as if the apocalypse was actually upon us.

Teammates were huddling together and sharing arrows as if our lives depended on it. I shot a teenage girl I had never met before and did the DX crotch chop while awkwardly holding my bow. It was incredible. 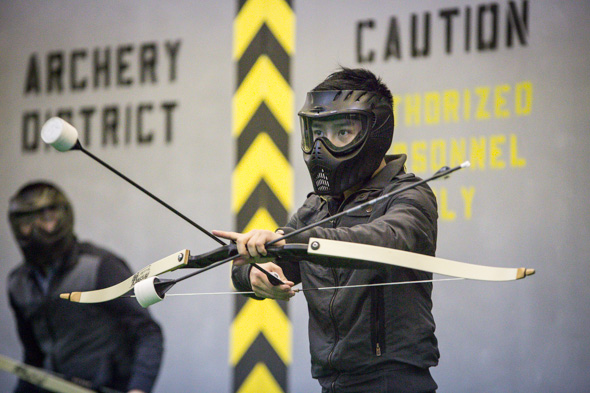 Although there was a lot of running, ducking and dodging, the 55 minutes went by quickly. At the end, we all staggered breathlessly out of the field area, back towards the entrance. The next group of archers were already clamouring to get in, eager to take our places. 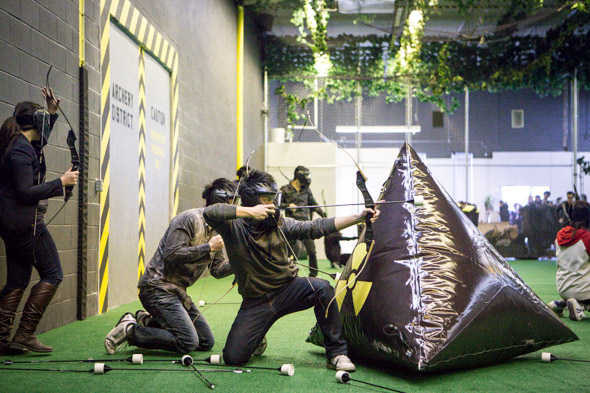 I will definitely be returning to Archery District. Whether you're interested in having a fun time with friends or preparing for the imminent destruction of our world as we know it and a regression to hand-to hand combat for basic human needs, it's an exciting, novel way to spend an afternoon. 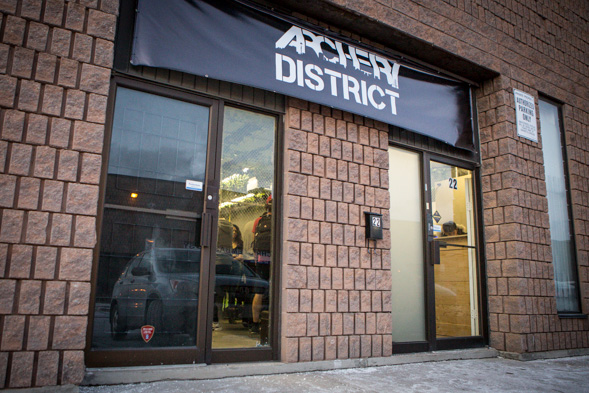